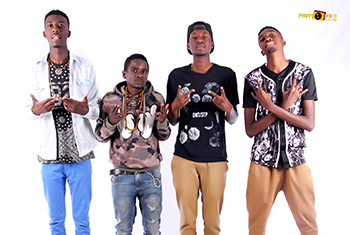 UNTOLD PROFILES with FELIX NYAMBE
IF you ever thought their maiden appearance during Nigerian Superstar Davidoâ€™s Lusaka bash was all they had to offer, well, think again, because Team Wall Street Rappers are a phenomenon group with a difference.
With due respect to some of the most formidable rappers to have graced the local stages, Team Wall Street Rappers bring some resounding freshness to the industry.
They are set to overshadow some of the current rap revelations, such as Channel O run-away winners Zone Fam, CRI$I$, Macky II, his rapturing brother Chef 187 or even his [Macky IIâ€™s] nemesis, Slap D.
But to the contrary, Team Wall Street does not look at these inspirational local rappers as competitors, but rather, their â€œbrothersâ€ in the game.
And so, when the group came together to raise the bar in the rap music genre, they were simply fulfilling their childhood dreams of becoming rap superstars.
â€œWe have been friends since childhood and I guess it was easy coming together as a rapping quartet,â€ said Simbi Banda a.k.a. Tos, 21, who completed grade 12 at Lusakaâ€™s Tick Secondary School in 2011.
Bean Lyoba, a.k.a. Spades, 19, a graduate of Matero Boys Secondary School in Lusaka chipped in: â€œBecause we had everything musically common, fusing together as a rapping group was just the last thing we could think of.â€
And so, with other exciting members, Kajiko Mazeze a.k.a. Kryme, 20, and Lushomo Syabbamba, 18, the teens set out to conquer the rap world, and they are slowly getting there.
Now ably managed by one of the local music trendsetters, Alfred Kafunga, 22, who is setting the tone of local music management, Team Wall Street members look set to be a mesmerising lot.
Their maiden shows include curtain-raising for Davido, a name associated with fine raps globally, was at a sell-out bash at Woodlands Stadium two years ago. And the magic began!
â€œIt was an amazing experience, one which only dreams are made of,â€ stated Kafunga, as Kajiko added: â€œAs young and upcoming artistes, we could not imagine ourselves sharing the stage with Davido, but then there is always the beginning.â€
With songs such as Come My Way, which features another of the latest local prodigies, HK (Honest Koala), Drinks on Ice, Am All That and Show- Off, Team Wall Street fans were left with the unexpected awe.
After the Davido experience, the group, whose coming out of the cacoon brings fond memories of triple Born â€˜nâ€™ Bred winners, Familiar, Lusaka was abuzz with the new kids on the block.
â€œWe have been performing across the city of Lusaka recently with the more upbeat gigs staged at Smugglers Inn during the Cavendish Universityâ€™s pool-side dance party,â€ said Kafunga.
Did their new legion of fans have enough of the boys? Well, when news went round that the boys were heading for the Hollywood City, all roads led to Panganani Road!
â€œIt was one of those street shows where your fans do not want you to leave the stage, but why would you? We were born entertainers and we believe in just providing that,â€ assured Syabbamba, a.k.a. Str8t Shots.
The groupâ€™s EP (extended play) collection is on the horizon and what an astonishing recording produced by 4th Profile Studioâ€™s Swice.
With the impending release of the EP, and its follow-up videos, the group has also set its eyes on performing at platforms like the MTV Africa Music Awards (MAMAS) in the near future.
And that they can raise the bar set by Zone Fam may not be far from the gospel truth because Team Wall Street Rappers have all it takes to shame their critics, although the road has been rough.
According to the boys, who are also not ruling out going back to school for their tertiary education, the likes of JK and Mandela Fellowship graduate B-Flow, have both been an inspirational lot.
â€œWe are encouraged by their [JK and B- Flow] recent achievements, but with more promoters and institutions such as mobile phone providers coming on board, Zambian music, rap in particular, will be appreciated globally,â€ Kafunga observed.
Tos added: â€œRap music, at the moment is being appreciated by many, although some critics have not embraced it to the fullest.â€
Much of the boysâ€™ inspiration is drawn from the music of such rap legends as 50 Cent, Jay-Z, Eminem, Lil Wayne, King Los, J. Cole as well as Dr Dre, with South Africaâ€™s duo of Casper Nyovest and AKA, Whiz-Kid (Nigeria) and Sakordie (Ghana), impressing the group with their achievements.
fmmusik@yahoo.co.uk, 0979360993/0964873656.