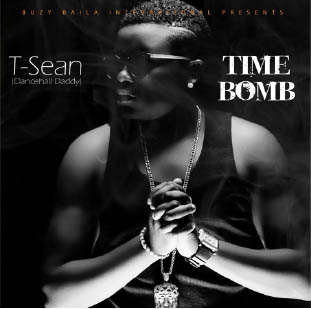 By KELVIN KACHINGWE
DANCEHALL artiste T-Sean (Richard Mulenga) is in a fortnight expected to release his fourth studio album which he has titled Time Bomb.
The album, to be released under Busy Baila International Record Label, is a follow-up on Mu Mirror which came out last year, the same year he also recorded 90 Days. His first album was titled Adamu (The Definition), a 2012 release.
T-Sean, a 2013 Zambian Music Award and Born nâ€™ Bred Award nominee, has already released three singles from his 13-track new album to be unveiled on September 26.
The singles are Judas, Balinshilikila which features Copperbelt rapper Chef 187, as well as a dancehall track titled Tako, released last week together with its video.
â€œI have worked really hard on this one. I have put in my all and I have no doubt people will love it, just like they have been with my previous works. This one is bigger and better. No doubt about it,â€ he says.
â€œAnd talking of Tako, I am really humbled at the response it has been receiving. I just released the video and song a few days ago and already, people are buzzing about them. That should tell you the kind of work I have put in on this album. I am leaving no stone unturned.â€
On the album, which will be officially launched on October 31 at Barclays Sports Complex in Lusaka, T-Sean, who calls himself the Dancehall Daddy, has worked with the likes of OC, Dacosta, Exile, Tyce, Hamoba, Macky II, Chef 187 and Joe Chibangu.
â€œIâ€™m confident that the album will do well, and the fans will like it. I think it will do better than my previous works,â€ says T-Sean, who was performing at the Bank Cafe in Lusakaâ€™s Chilenje last weekend.