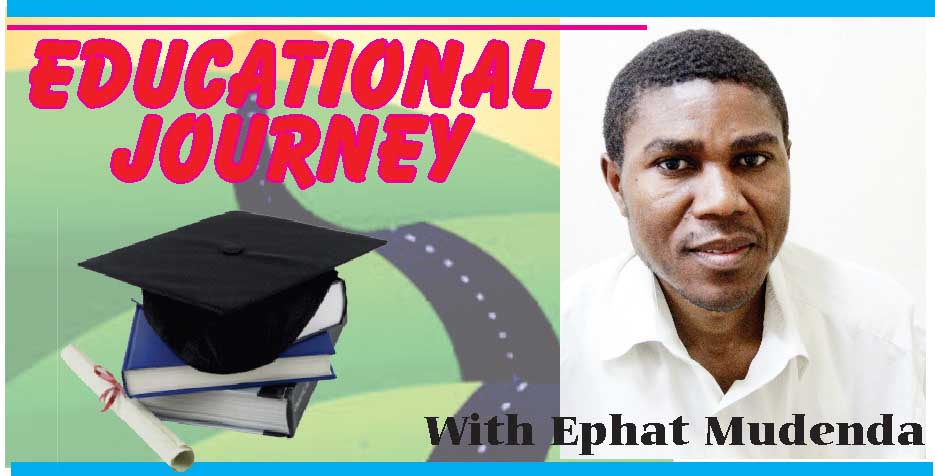 Educational Journey with EPHAT MUDENDA
WHEN a student passes his or her senior secondary school examinations with flying colours and is subsequently admitted into a higher learning institution, society considers such a one to be a person of high intelligence.
For a pupil to get six points, or even 10, 13 or 15 points in the exams, it means one studied very hard and was focused and determined to succeed in one’s academic work. Such a one really deserves to go to college or university to pursue their dream careers.
Those who have to spend money in form of tuition and other fees regard education at that level as a worthwhile investment. They, together with their families, friends and neighbours, look forward to a moment – after three, four, five or seven years – when they will attend the graduation ceremony of their son, daughter, brother, sister, nephew or niece who would have cudgelled their brains to obtain a degree or diploma at long last.
But while the journey continues, self-discipline among students is of vital importance to their academic success and career development later in life. It is in this light that they should look at themselves as active, rather than passive, participants in the socio-economic development of the country.
Self-discipline is the ability to make yourself do something; especially something difficult. For students in colleges and universities, their intelligence – the ability to fully understand issues and think in a logical way – demands that they should be able to always act responsibly for their own good and that of society as a whole.
Now, the story of Evelyn Hone college students who rioted over poor TEVETA (Technical Education, Vocational and Entrepreneurship Training Authority) examination results last week, resulting in law enforcers arresting 333 people, was truly a sad one. Fifty-nine of them there unfortunate National Institute of Public Administration students who were just caught up in the confusion after Evelyn Hone students pulled down their wall fence. It is good that the authorities fully appreciated their predicament and released them unconditionally.
Among those who found themselves behind bars are individuals whom families, friends and neighbours regard as well-behaved people back home. But as they are shown on television in a ‘bandwagon’ during demonstrations, they speak and act like drunken people. They insult, burn tyres and logs on the roads, they throw stones at innocent people and cause a lot of damage to property, including private vehicles, as they engage in running battles with the police, whom they refer to as ‘our cousins’.
The question is, why do students engage in such acts of violence when logic dictates that there are always better channels to resolve a crisis which include dialogue between the aggrieved party and the relevant authorities?
Had Evelyn Hone students waited for the meeting between their college management and TEVETA officials to take place, they would have understood the reasons why their exam results came out as they did. The knowledge that the institution had not presented their continuous assessment in a correct manner, and that management later worked on the problem to have the results recalculated, would have prevented the confusion and subsequent arrest of the institution’s learners.
Those who had failed a subject or two should have simply rewritten those courses. They should not have deliberately relaxed and let the deadline to enter for the examinations pass so that, finally, they should unwisely resort to rioting at the expense of their academic progress. A student is not expected to find himself or herself ‘on the other side of the law’. Their duty should be to focus on education alone; at least while they are studying.
TEVETA acting corporate affairs and communications manager Clive Siachiyako was right when he said: “It’s not our mandate to force people to rewrite the subjects they have failed, and we are not in the business of making people who have failed pass.”
Institutions of higher learning should be free of riotous behavioural patterns so that they achieve their aim of producing well-prepared individuals who are needed by industry, as well as those who will capitalise on innovations so as to create businesses, jobs and wealth for the country.
This demands self-discipline from citizens, especially students in colleges and universities and all those directly operating in such institutions.
When learners resolve to become peacemakers, avoid violent conduct within and outside campus grounds, respect societal norms and exercise maximum patience, then they will prove their intelligence to the wider world.
emudenda@daily-mail.co.zm/ephatm@yahoo.com

Public enterprises: Are they ‘devils’?
Positive attitude is key to Vision 2030