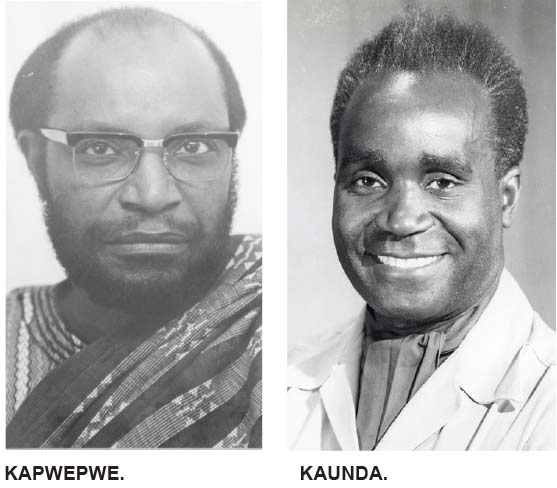 Our main object is to survive ourselves, to improve our conditions
KELVIN KACHINGWE – Petauke
WHAT was the struggle for independence all about?
It is a question that this writer was asked by Philip Daka. And who is Mr Daka?
An educationist, he served as permanent secretary when Malimba Masheke was Prime Minister as well as when Levy Mwanawasa, Godfrey Miyanda and Christone Tembo served as vice presidents.
But that does not quite do justice to him in so far as Zambiaâ€™s struggle for independence goes. What perhaps does is a letter by Deputy Secretary to the Cabinet Peter Kasanda to the Petauke district commissioner asking her to get in touch with Mr Daka as he could be of great help as the country celebrates its golden jubilee.
Mr Daka, who resides 25km from Petauke Boma close to the Ukwimi Road, is the author of From Northern Rhodesia to Zambia: 1924 â€“ 1964, an essay he wrote for the post fulfilment of the secondary teacherâ€™s certificate for the University College of Rhodesia and Nyasaland Institute of Education at Chalimbana Campus in 1965.
It should be noted that between 1894 and 1924, the British South Africa Company (BSAC) administered the country now called Zambia.
It is the BSAC that brought the British flag and abolished slavery and established administration throughout the country.
It was in 1924 that the British government took over Northern Rhodesia and posted a governor to represent the British Crown. The country was also declared a protectorate where the interests of the indigenous people would prevail above those of other people living here such as white business people and other investors.
According to Mr Daka, this policy was called paramountcy of African interests, and it also covered Malawi but not Southern Rhodesia, which was a colony in the hands of white investors.
â€œSo, whites in Northern Rhodesia didnâ€™t like the policy of paramountcy of African interests. They wanted a policy similar to that of Southern Rhodesia. One leader of the whites in Northern Rhodesia, Mr L F Moore of Livingstone said this in the Legislative Council:â€˜Self-preservation is the first law of nature and in this case, it is to be borne in mind.
We white people have not come to this country solely and even mainly to raise the native in the scale of civilisation. That is not our main objective. Our main object is to survive ourselves, to improve our conditionsâ€™,â€ Mr Daka says.
About this time and before, some whites wanted Southern Rhodesia and Northern Rhodesia to amalgamate so that they would form one country under one constitution. However, many whites, particularly in Southern Rhodesia, opposed this because Northern Rhodesia was a poor country.
However, when the copper mines were opened in Northern Rhodesia, the idea of amalgamation again came up. But the British colonial office opposed this proposal which came from the whites arguing that Northern Rhodesia and Nyasaland could not join Southern Rhodesia, a colony where power was in the hands of white people.
Mr Daka says this was not surprising as Sir Huggins, the Governor of Southern Rhodesia did not think blacks were equal to whites.
â€œHe openly used to say â€˜the history of the world suggests that there is prima face evidence that there is something wrong with the Bantu branch of the familyâ€™.
In 1948, Roy Welensky, while in London, boldly asked the Colonial Secretary to allow amalgamation but was flatly refused,â€ he says.
It is out of this that the idea of the Federation of Northern Rhodesia, Southern Rhodesia and Nyasaland was born. This meant that each of three countries would keep its own constitution, and then, there would be a fourth constitution which would allow all the three countries to work together. This meant three territorial governments and a federal government.
To make the idea of a Federation acceptable to Africans, Welensky said in the Legislative Council that: â€œI want to express views franklyâ€¦I donâ€™t think, and I want to stress that as strongly as I can, that the next 15 or 20 years will not see the black man ready for our form of government. I think it will be a tragedy if that should happen, and I want that on record. I say that the next 50 or possibly 100 years, the African has an important part to play here, but he has to play that part as a junior partner, and I am prepared to accept him as such.â€
But the African nationalists were opposed.
African National Congress (ANC) leader Harry Nkumbula best expressed this.
â€œI cannot help thinking and convincing myself thatâ€¦the best government for the black people is a government fully manned and run by the black people of Africa. This is also true of any race. I shall die a very unhappy man if I shall not see a truly African government in central Africa.â€â€
However, the Federation was imposed on the Africans.
But before that, some key people such as Justin Chimba, Reuben Kamanga and Simon Zukas formed an action group to oppose the Federation. Simon Zukas was exiled to the United Kingdom while Reuben Kamanga was imprisoned, perhaps the first political prisoner.
The African politicians and trade unionists had agreed to go on strike on April 1, 1953 to oppose the Federation.
But on the actual day, Lawrence Katilungu instructed miners to go to work and not to mix politics with trade union issues.
â€œBut to his credit, Governor Arthur Benson became the first Governor to invite Nkumbula to government house to talk constitutional issues. The Governor of Tanzania also invited Julius Nyerere for the same. Maybe, this was directed from the colonial office in London in a bid to avoid a Mau Mau situation in Tanganyika and Northern Rhodesia.
â€œGovernor Benson was firm with both Africans and white settlers. No wonder Welensky nearly carried an arrest of the Governor. In summary, the British colonial Secretary and Governors in this country did not give up the policy of paramountancy of African interests. The Federation died on December 31, 1963,â€ Mr Daka says.

Zaloumis family : 4 generations and counting
The road to Zambiaâ€™s 50 Years of independence!