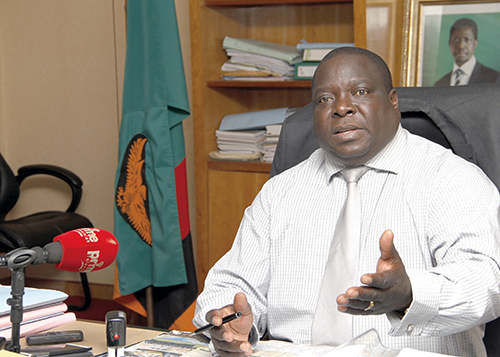 ALVIN CHIINGA, Lusaka
GOVERNMENT says the price of mealie-meal will not increase because all fundamentals in the production line of the staple food remain unchanged.
Chief government spokesperson Chishimba Kambwili said the Millers Association of Zambia (MAZ) is â€œarm-twistingâ€ Government by taking advantage of economic upheavals to accrue benefits through proposals to increase mealie-meal prices.
â€œThere is enough maize on the market and no other factors have changed. The Minister for Agriculture [Given Lubinda] has been directed to meet with the Millers Association of Zambia to communicate this position,â€ he said.
Mr Kambwili, who is Minister of Information and Broadcasting Services, said this at State House yesterday when briefing the press on decisions made by the 21st Cabinet meeting on Monday.
The minister said Government will not succumb to any manipulation by MAZ that will disadvantage the people of Zambia.
â€œThere is no justification of any increase in the mealie-meal prices because the stock that the millers are currently using to produce maize is that of the previous crop marketing season. Even the increase in the electricity tariffs has not yet been effected,â€ Mr Kambwili said.
He said Cabinet has been briefed that the Food Reserve Agency (FRA) has so far bought more than 500,000 metric tonnes of maize and the nation has been assured that payments to farmers remain prompt and continue to be made no later than two weeks from the date of collection.
Mr Kambwili said Government will not relent in its quest to export maize to earn foreign exchange.
And Mr Kambwili also announced that Cabinet will review the â€˜highâ€™ penalty fee charges for traffic offences and will soon announce the changes.
He also said Government clarified that the October 18, 2015 national prayers are inter-denominational and are being organised under the leadership of a broad-based Christian platform through church mother bodies.
He said Government commends the leadership and ordinary members of the Christian fraternity for the support for the day for repentance, prayer and fasting.
Meanwhile, Cabinet has approved the hosting of the Economic, Social and Cultural Council secretariat (ECOSOCC) of the African Union (AU) in Zambia.
Mr Kambwili said the hosting of the ECOSOCC secretariat away from the AU Commission headquarters in Ethiopia is aimed at enhancing its independence and legitimacy.
Mr Kambwili also said Cabinet approved the appointment of nine members to serve on the Zambia National Building Society board of directors in line with the provisions of Section 3A (2) of the Building Societies Act.
Cabinet also approved the appointment of nine members to serve on the National Institute of Public Administration board as the tenure of office of the previous board has expired.
Cabinet also resolved that Zambia is obligated to realise the equality between men and women through appropriate legislation.