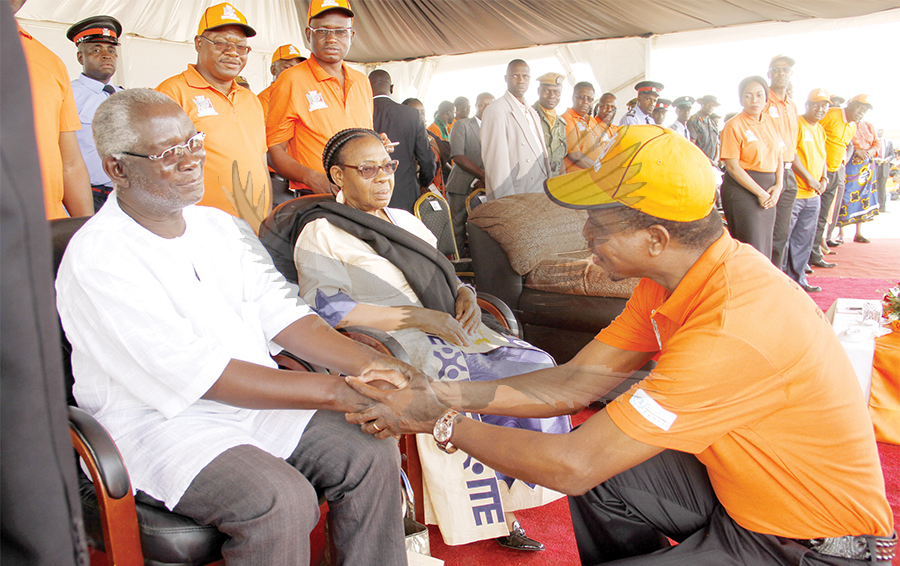 NANCY SIAME, MWAPE MWENYA, Kafue
PRESIDENT Lungu is saddened by the growing trend of wives perpetrating violence against their husbands.
President Lungu has also directed the Ministry of Finance to integrate gender-responsive planning and budget principles in the national planning and budgeting process.
The Head of State has called on couples to engage in dialogue to put an end to the increasing number of gender based violence (GBV) cases against men.
Mr Lungu said this in Kafue yesterday when he officiated at the commemoration of 16 Days of Activism against GBV under the theme: â€˜Orange the world: Raise money to end violence against women and girlsâ€™.
â€œIt has become prevalent to see news hitting the headlines of a woman having killed a spouse in bizarre circumstances. This is unfortunate,â€ Mr Lungu said.
Four women of Lusaka are currently appearing before the courts for allegedly killing their spouses within a space of three months while another one is in police custody for a similar offence which occurred on Tuesday this week.
Mr Lungu said children are the ones who end up suffering after the death, injury or imprisonment of parents involved in GBV.
â€œWe need to move together and eliminate all forms of violence regardless of who the victim is,â€ President Lungu said.
And Mr Lungu said the integration of gender-responsive planning in budgeting principles will help address specific gender needs and enhance equal distribution of finances among women, men and children.
â€œMy Government is committed to ensuring that financing of programmes related to gender mainstreaming, especially GBV, is improved,â€ Mr Lungu said.
The President said gender-responsive planning and budgeting will help draw attention to issues that have been ignored in the conversional budget and decision-making.
Mr Lungu said Government is committed to continuing pursuing gender-responsive policies and programmes to achieve gender equity and equality, which are critical for accelerated national development.
The President said the theme provides an opportunity to explore various ways of mobilising sustainable financing to support initiatives aimed at preventing and ending GBV.
Earlier, Non-Governmental Organisations Coordinating Council (NGOCC) board chairperson Sarah Longwe said women and girls remain the most-prone victims of GBV in the country.
Ms Longwe said statistics compiled by the Victim Support Unit (VSU) in the third quarter of this year indicate that 4,235 cases of GBV have been recorded.
She is concerned about the increasing number of GBV cases despite sensitisation campaigns by Government and the private sector.
Ms Longwe called on the private sector to consider establishing a GBV fund to accelerate the fight against the vice.
â€œMoney is critical in the fight against GBV as stated by this yearâ€™s theme,â€ Ms Longwe said.
She also condemned the increase in cases of women allegedly killing their spouses in the recent past.
United Nations (UN) acting resident coordinator Mary Otieno said the UN system in Zambia spent an estimated US$8.6 million between 2014 and 2015 in the prevention and response to GBV.
Dr Otieno said robust and sustained funding for efforts to end GBV remains insufficient.
â€œProtecting women and girls from violence and harmful practices is not only a moral and human rights imperative, it is also critical to the economic and social progress of nations,â€ Dr Otieno said.
Minister of Gender Victoria Kalima said Government spends a lot of money to address GBV which if avoided would be channelled towards development activities.