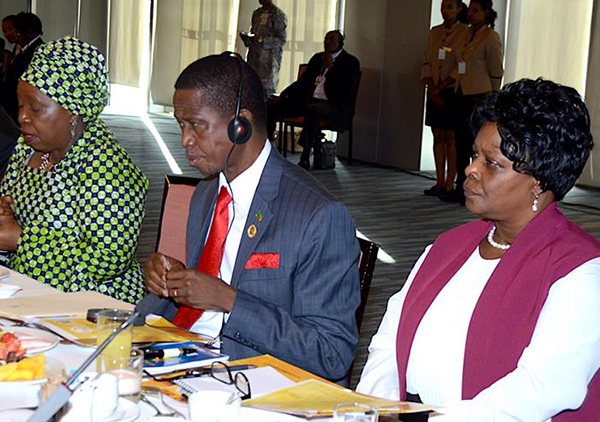 PRISCILLA MWILA, Lusaka
FIRST Lady Esther Lungu is concerned about the increasing number of gender-based violence (GBV) cases in the country.
Mrs Lungu is touched by recent cases of GBV reported in some parts of the country.
This is contained in a statement issued yesterday by first secretary for press and tourism at the Zambian Embassy in Ethiopia Naomi Nyawali.
â€œWomen should not resort to using knives and guns on their husbands but should endeavour to resolve their marital problems amicably and in a Christian way,â€ she said.
The First Lady said Zambians should live by morals provided in the Bible and those expected of a Christian nation.
She said teachings in the Bible should be used as standards for resolving conflicts in homes and any other hostile situations.
Mrs Lungu said love, tolerance, patience, understanding and forgiveness should be among the guiding principles in the conduct of every citizen.
She appealed to married people in the country to be faithful to each other and avoid the temptation of having extramarital affairs.
Mrs Lungu said extramarital affairs are a contributing factor to increased GBV and has since called on citizens, both men and women not to be aggressive and resolve differences cordially.
More than five men have been killed by their spouses in the last five months with the latest being Autoforce proprietor Reeves Malambo who was brutally murdered allegedly by his girlfriend last Sunday, while in another case a man of Kaunda square in Lusaka is said to have killed his son and girlfriend after a quarrel.
And police statistics have indicated a rise in GBV with 18,540 cases recorded last year compared to 18,088 in 2015 representing a 2.4 percent increase.