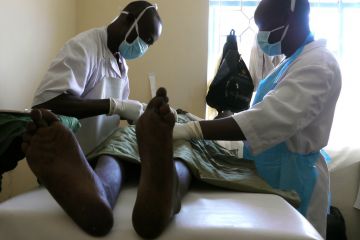 MALE Circumcision from the Christian point of view, the Muslem point of view and the health experts point of view, is good.
What is not good, however, is the manner in which this ‘simple’ operation is done by some people.
A case in point is the revelation that some sections of the Muslim community in Lusaka are engaged in backyard circumcision operations. This is very shocking because in this era, one expects traditions to move with times for the good of the ‘patients’.
On Saturday, 15 teenagers of Lusaka were taken to the University Teaching Hospital (UTH) after undergoing traditional circumcision, which left two of them bleeding excessively.
The Muslim boys were taken to the hospital after police stopped the initiation ceremony following a tip-off from some concerned members of the public.
Male circumcision has for a long time been part of the Muslim tradition and is commonly practised among followers of the religion.
But to conduct it in a temporary pole-and-grass structure, apparently without any due regard for hygiene and health risks, is just unacceptable.
We are not against the culture of male circumcision, which the Muslim members have chosen to religiously adhere to. We, in fact, would encourage parents to have their sons circumcised as advised by health experts.
What we disagree with is the manner and the environment in which the circumcision was conducted last Saturday.
Just why would one want to take his or her son to such an environment when there are many health institutions that do conduct these operations at no cost at all to the patient?
Surely, if there is nothing else other than the surgical operations going on in these shabby ‘clinics’, there is no point in risking the boys’ health in such a manner.
If there are additional activities woven around these mass circumcision activities, the authorities and indeed the rest of the public should know.
Last Saturday’s practice apparently amounted to some fetish practice. The environment was not conducive for a medical practice because it did not follow laid down procedure when conducting surgery.
The ideal situation, first and foremost, is to ascertain that the persons mandated to conduct such sensitive surgery are qualified medics from authorised medical institutions.
The surgeon should then examine all the boys due for surgery to make sure that they are all medically fit to undergo the procedure.
For instance, a full blood count is done, so is the blood pressure determined to ascertain the medical suitability of the candidate for circumcision.
Parental/guardian consent is also sought. Unfortunately, it would seem that some parents endorse such operations.
Medical institutions are best suited for such procedures because they have back-up equipment and facilities in the event of any procedure failing.
Besides, all equipment used in surgery is supposed to be sterilised.
We wonder whether the equipment used last Saturday met the basic medical standards because anything short of that may make the boys prone to infections.
We are also aware that some Muslims, and rightly so, take their babies to proper medical institutions. Why should other children be subjected to dark-age surgical procedures?
The exposure of the backyard surgery is also an insult on public health facilities, which have been offering free male circumcision.
Male circumcision is a government-driven policy being rolled out throughout the country.
It is, therefore, surprising that Lusaka residents, who are expected to be knowledgeable, could choose to hide behind religion in conducting risky circumcision.
Apparently, these backyard mass circumcision operations have been going on for years. The ‘surgeons’ may even claim that they have conducted the operations safely. If that is indeed so, we thank God. But it’s time to move on and not take avoidable risks.
We hope that the Health Professions Council of Zambia and the well-meaning Muslims will take interest in the matter and give it the attention it deserves to ensure that such rogue practices do not recur.

Zambians are the winners