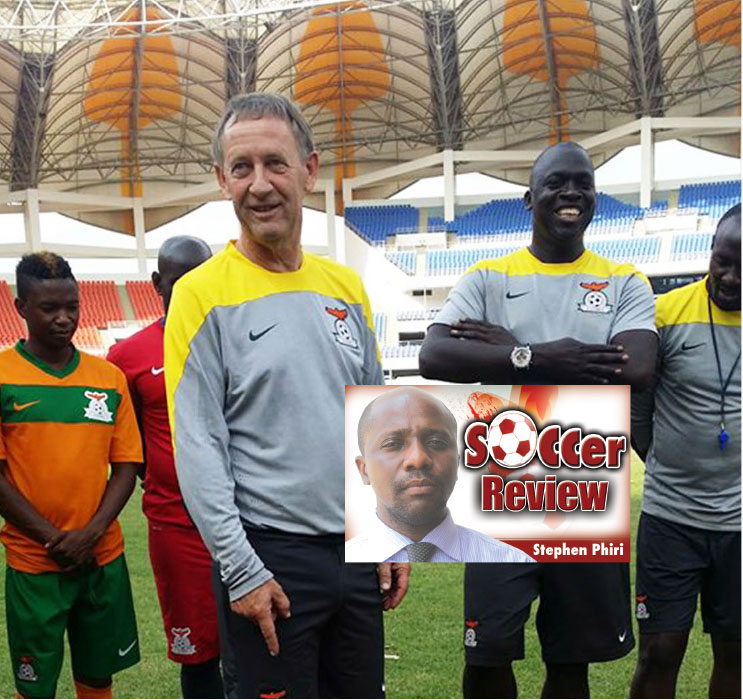 SOCCER REVIEW with STEPHEN PHIRI
THE coming of Dutchman Nico Labohm is a great relief to Zambia. Great relief because, quite honestly, the team seemed to have been off course headed for the opposition direction from the 2015 Africa Cup of Nations host country, Morocco.
I do not want to entirely blame it on coach Honour Janza but the team failed to do much in the first two qualifiers and there were genuine fears qualification would be a huge challenge.
The Dutchman, engaged as assistant coach, will bring a new dimension and fresh breath to the team and that is very important.
But the Football Association of Zambia (FAZ) should have known this from the start; they should have anticipated this failure and adequately and genuinely beefed up the squad.
The team needs some inspiration from somewhere and the Dutchman could just be the one carrying that magic wand. Make no mistake, though; he cannot solve all the intricate puzzles the team is in. We need everybodyâ€™s input. After all, he is but only an assistant.
Itâ€™s hard to understand why FAZ can hire an assistant who cannot have as much influence as the head coach or technical advisor. Itâ€™s a strange decision, perhaps meant to protect the pedigree of Janza.
So, who takes the credit when the team qualifies or who is to blame if failure succeeds? In this case, the buck stops at Janza.
Best wishes to the Chipolopolo as they take on Niger in Niamey this Saturday, hoping to get off the ground having lost to nonentities Cape Verde and drawn with Mozambique.
**********
Photo finish: This is what the Super Division title is headed for – both for the title as well as relegation.
While Power Dynamos, Zanaco and Zesco United are aspiring for the countryâ€™s ultimate club prize, it is a different game for Kabwe Warriors, National Assembly, Red Arrows, Green Buffaloes, Indeni and to some extent Konkola Mine Police who are grasping for breath to stay afloat.
Either Power, Zanaco or Zesco can pick the championship but it all depends on how these teams handle the remaining four games.
This is where depth or pedigree counts, including the extra incentives the sponsors of these teams will dangle to their players to pump up that adrenaline and give out their best.
So far, credit should go to Power and Zanaco for the endurance they have exhibited knowing that these teams fared badly last season.
Power finished eighth while Zanaco ended 10th in one of their most miserable seasons ever.
For Zesco, they have been consistent and were expected to be at the top of the log right from the start of the season up to the very end.
Zesco are third with 52 points, at par with Zanaco, while Power have 53 points.
Zesco have picked 13 points against the top five teams [three from Nkana, three from Zanaco, six from Napsa and one from Power].
Power, on the other hand, are second highest from Zesco, having drawn with Zanaco, beat Napsa, drew with Nkana and beat Zesco.
Zanaco have never beaten any of the top five â€“ drew with Power in Kitwe, have drawn both games with Power, lost both games to Nkana and lost to Zesco as well.
So, Zanaco are effectively at the bottom in the pecking order while Napsa are fourth since they picked six points from the top five teams – they won at Nkana, drew with Nkana at home and lost away to Power and have drawn both games with Zanaco.
Defending champions Nkana have picked eight points â€“ beat Zanaco at home and away, drew with Power and still have a game against Napsa.
Power on the other hand play Napsa this weekend, take on Nkana next weekend and still have unfinished business with Zanaco.
Zanacoâ€™s title aspirations hinge on Buffaloes whom they play this week, then they travel to Zesco next weekend and later host Power.
Mathematically Nkana, who are six points behind the Confederation Cup slot and seven points behind the Champions League berth, have a chance of retaining the league title as there are 12 points to be competed for.
Napsa, seven points off the pace, have a realistic chance to play in the Confederation Cup considering that the top five are still playing against each other.
So there is still two weeks of total football.
At the base, it is getting hotter with two defence teams â€“ Arrows and Buffaloes â€“ itching to demonstrate their military character.
Assembly and Indeni may be forgiven for having been recently promoted while Konkola Mine Police and Roan United need help, not just from their sponsors but, maybe, even constituency development funds, for them to be competitive.
sphiri@daily-mail.co.zm, phiristeve4@gmail.com