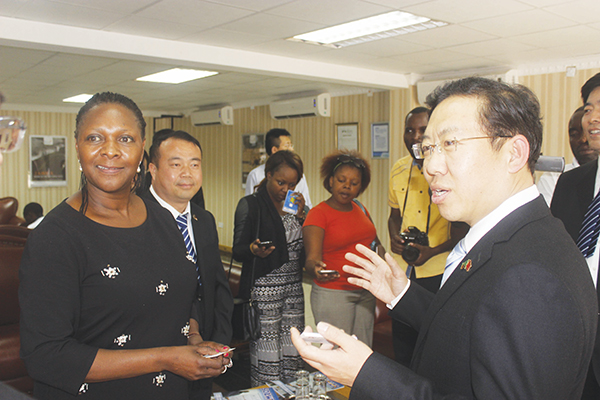 ALVIN CHIINGA, Lusaka
GOVERNMENT has called for partnership with the private sector to create wealth and jobs and ultimately significantly reduce poverty.
Minister of Commerce, Trade and Industry Margaret Mwanakatwe said Government is making great strides in providing an enabling business environment for business to thrive.
Mrs Mwanakatwe said this in Lusaka yesterday during the launch of â€˜One Road One Beltâ€™ Industrial Park.
The event was witnessed by a Chinese delegation of investors led by the secretary general of the Tianjin Federation of Industry and Commerce, Liu Daogang
Mrs Mwanakatwe said in a speech read for her by Minister of Foreign Affairs Harry Kalaba that Government has put in place both fiscal and non-fiscal incentives in key priority sectors which include mining, manufacturing, tourism, infrastructure development and information communication technology (ICT).
She also said Government has introduced income tax incentives for manufacturing enterprises and investments established in rural areas.
The minister said the income tax incentives also cover developers of and operators in multi-facility economic zones (MFEZ).
Mrs Mwanakatwe said that the â€˜One Road One Beltâ€™ incentive is an extension of the economic belt which was proposed by Chinese President Xi Jinping in 2013 and directly impacts 4.4 billion people of around 63 percent of the worldâ€™s population and deals with an economic aggregate of US$21 million
And Mr Liu said that the â€˜One Road One Beltâ€™ initiative will facilitate an increment in exports and imports between China and Zambia.
Mr Liu also said the initiative will help in boosting trade relations between China and Zambia.
He appealed to business houses to take advantage of the initiative, adding that it will also be used as a platform for Chinese investment in Zambia.
Meanwhile, chairman of the â€˜One Road One Beltâ€™ Zambia Industrial Park, Zou Ling, said US$300 million will be pumped into the initiative for investment in several sectors.
Mr Zou said the initiative is envisaged to create over 1,000 jobs in the country and will also encourage more Chinese investment.
He said Government will benefit tremendously from the initiative as the China-Zambia bilateral relations will further be strengthened.
The visit by the Chinese investors has been facilitated by the newly launched Zambia China Association.