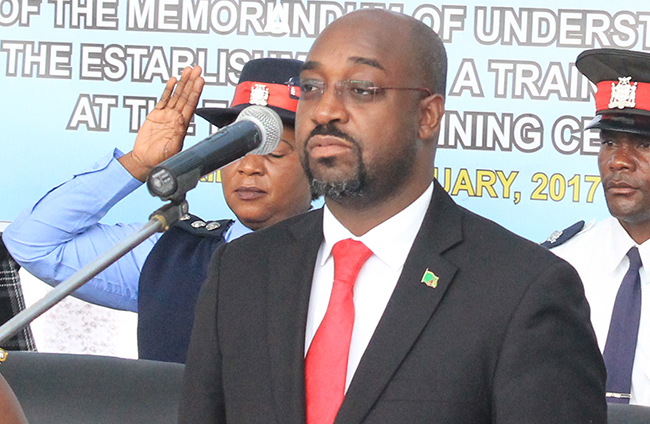 CHIMWEMWE MWALE, Livingstone
MINISTER of Transport and Communication Brian Mushimba has challenged the Inter-governmental Standing Committee on Shipping (ISCOS) to demonstrate its continued relevance to Zambia in view of

the country’s land-linked status and ambitious diversification agenda.
Mr Mushimba said this is also because Zambia’s previous involvement in ISCOS was premised on its exportation of copper.
He said Government will not be expected to subsidise the high cost of transportation of cargo as mining is being undertaken by the private sector.
The minister, who is outgoing ISCOS chairperson, said this during the official opening of the fourth meeting of the ISCOS general assembly at which Tanzania took over the chairmanship.
“I also wish to implore the ISCOS secretariat to bring out innovative strategies that will see the effective use of the inland waterways, including revenue generation from shipping facilities such as inland container depots, warehouses and inland dry ports,” Mr Mushimba said.
Mr Mushimba commended member states for their support during two years of Zambia’s tenure of chairing the organisation in accordance with the policy of rotation of chairmanship of the ISCOS, which clocks 50 years today.
He said a number of significant activities and achievements have been recorded during Zambia’s two-year tenure, which included the provision of timely advice to member states concerning Marine Cargo Insurance (MCI) on imports and exports.
Mr Mushimba said this was to ensure that imports and exports are procured locally as contribution of the shipping industry to stem the avoidable outflow of foreign exchange from countries.
He said the region lost about US$4 billion from marine cargo insurance earnings between 2011 to 2015 prior to that advisory.
And Tanzanian High Commissioner to Zambia Grace Mujuma said there is need to formulate supportive policies and guidance for optimal operations in ISCOS member states.
Ms Mujuma, whose country has assumed the ISCOS chairmanship, said member states need collaboration to ensure objectives for the committee are met by ensuring that individual countries play their roles effectively.
And Mr Mushimba has called on stakeholders in the Information Communication Technology (ICT) sector to enhance collaboration in dealing with cyber threats as Government prepares to introduce five Bills in Parliament for approval.
Mr Mushimba said the ministry will play a critical role in initiating dialogue and engaging the best minds across Government, industry and academia to share knowledge on best approaches to facing the ever changing needs of the ICT sector.
He said the ministry has also effectively positioned itself to provide progressive policy and legal frameworks governing the ICT sector.
The minister said this yesterday during the official opening of the ICT Society of Zambia 10th Annual General Meeting and conference.
The AGM and conference is being held under the theme: ‘Advancing a knowledge-based economy through smart and secure ICT services-cloud computing and security”.
Mr Mushimba said the ministry will propose five Bills, which are expected to be approved singly by Parliament.
These are the e-Government, Cyber Security, Data Protection, e-Transactions and e-Commerce Bills and the Cybercrime Bills, which is a penal law that will be used to prosecute cybercrime offences.
Mr Mushimba challenged the society to formulate tangible collaborative frameworks with stakeholders in the industry which will yield results such as talent and innovation promotion from institutions of learning.
And ICTSZ president Alick Siankumo said the competitiveness of economies depends on their ability to leverage new technologies.