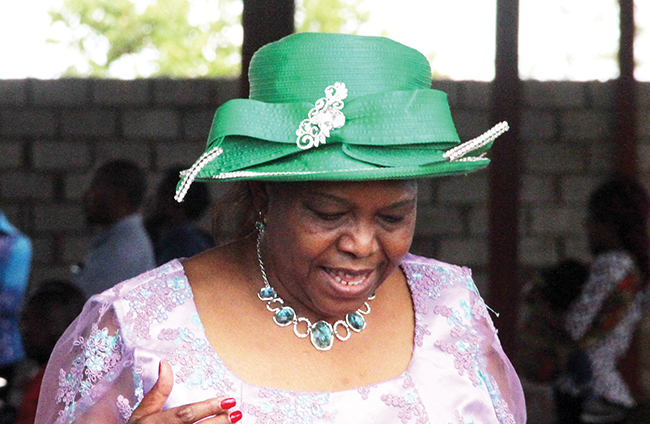 HONE SIAME and PRISCILLA MWILA, Lusaka
GOVERNMENT is saddened by gruesome murders and lack of respect for human life, acting President Inonge Wina has said.
She has also called for civility among couples when dealing with matrimonial-related issues.

Mrs Wina said in a statement yesterday that Zambia should not have room for continued deprivation of human life by virtue of the country being a Christian nation which requires citizens to love one another in accordance with biblical teachings.
She said the gruesome murders and other atrocities that have embroiled the country call for concerted efforts from the Church, religious bodies, psychologists, psychiatrists, civil society organisations and all stakeholders.
Mrs Wina said there is need to aggressively interrogate factors that lead people to commit such atrocities against their fellow human beings.
“Of late, we have witnessed gruesome murders within our homes and outside. Government is concerned about the consequences as society slips to the lowest levels of human existence where respect for human life is being eroded.
“Our country should have no room for continued deprivation of human life. No offence is worth killing or dying for. It is upon all members of the greater society to work with the groups highlighted herein to save our population from self-elimination,” she said.
She said the recent killing of a nurse allegedly by her husband in Katete in Eastern Province, gang-raping of a 33-year-old woman in Kitwe, picking of a decomposed body of a child believed to have been sexually abused before being killed, are all matters of concern.
“All these cases and many more point to the fact that much more needs to be done by groups concerned who include the Church, religious bodies, psychologists, psychiatrists, civil society,” she said.
She said it is disheartening that all these barbaric acts are being committed after revision of various pieces of legislation to stiffen punishment for perpetrators of gender based violence (GBV).
“The legal system has made adequate reforms to introduce stiff punishment for GBV offenders.
Other innovative legal measures have been put in place such as fast-track courts which enhance justice for victims of GBV.
“In spite of this, cases of GBV keep on being reported on a regular basis, an indication that our society has to do more to combat this scourge. I do realise that some people are advocating the ‘death sentence’ for killers. However, this is an issue for the Zambian society to decide,” she said.
And Minister of National Guidance and Religious Affairs Godfridah Sumaili has condemned the brutal murder of the Katete woman and has called for stiffer punishment against perpetrators of heinous crimes.
Ms Sumaili said the act was barbaric and against the principles of a Christian nation which Zambia upholds.
She said in an interview yesterday that couples should find better means of resolving their differences than resorting to violence.
“No one has any right to take another person’s life. God is the giver of life; it should be treated with respect and as a sacred gift from above. There are better ways of handling conflicts than violence,” she said.
Reverend Sumaili said couples and families should put God at the centre of their endeavours and resolve misunderstandings in an amicable manner.
A 26-year–old midwife at Kasama General Hospital was on Sunday gruesomely murdered, allegedly by her husband, a teacher at Omelo Mumba Primary School in Katete district after a marital dispute.