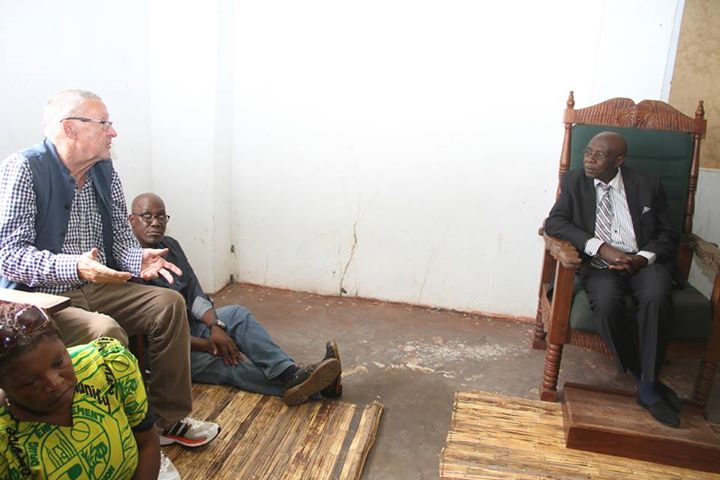 DOREEN NAWA, Mungwi
ACTING president Guy Scott is happy that Chief Chitimukulu has returned to his palace and that if it was within his powers, he would have signed the Statutory Instrument to recognise the Paramount Chief.
He, however, pledged to ensure that the SI is signed once the Patriotic Front candidate Edgar Lungu is voted into office on Tuesday.
Speaking when he paid a courtesy call on the chief yesterday, Dr Scott said in his limited powers, he made sure that police presence at the palace was removed.
â€œI removed police and made sure you were returned to the palace. I will ensure that a Statutory Instrument is signed to recognise you once a new president is elected because currently, I have limited powers,â€ Dr Scott said.
Dr Scott also asked the Mwine Lubemba and the Bashi Lubemba to ensure that people turn up in numbers to elect a new president.
â€œThere is now a new road up to the palace and please make sure that you give PF another mandate to ensure continuity. PF is development-oriented, we do not just talk but we show it through fulfilment of our promises,â€ Dr Scott said.
And Chief Chitimukulu, through his advisor Pius Kasutu, said the return of the Chitimukulu to the place has brought dignity and joy to the entire chiefdom.
Ambassador Kasutu said the chiefdom was happy to have Dr Scott in the area.
He has since called upon Dr Scott to continue promoting peaceful campaigns as he has always done.
â€œOur job is to work with the government of the day and we are happy with the way you are governing the country,â€ he said.
The chiefâ€™s advisor expressed joy at the return to the palace of the Chitimukulu.
And addressing a rally later, Dr Guy Scott told the people of Mungwi that Tuesdayâ€™s election is to ensure PFâ€™s continuity.
â€œTuesdayâ€™s election â€¦there is no need of changing Government. We need to ensure that we give Edgar Lungu the mandate to replace late President Sata,â€ Dr Scott said.
Dr Scott was accompanied by Minister of Youth and Sport Chishimba Kambwili, Minister of Agriculture and Livestock Wylbur Simuusa and Minister of Mines, Energy and Water Development Christopher Yaluma. Others are Deputy Minister of Trade, Commerce and Industry Miles Sampa, Lukashya member of Parliament Elfredah Kansembe and other senior government officials.
Inspecting the Pensulo-Kasama 330kv transformer, Dr Scott expressed happiness at the progress of the project.
â€œI am happy with this. This is why people should vote for PF again because we are development-oriented,â€ Dr Scott said.
And Zesco project site manager Hilner Mulapani said over 80 percent of the project has been completed and the project will be ready for commissioning in June this year.
While in Kasama, hundreds of Kasama residents braved the rains as they listened to campaign messages from Dr Scott and his team.
As messages kept unfolding, residents continued to ululate and sang songs of victory.
Speaking at the Freedom Park, Dr Scott said Tuesdayâ€™s election is like ukupyanika (inheritance) and the day has been declared a public holiday to allow people to vote.
â€œPlease when Tuesday comes, turn up in large numbers and cast your vote. Go, vote soberly and wisely and please ensure there is peace and wait for the results,â€ Dr Scott.
Speaking earlier, Mr Sampa said Kasama and Northern Province is PFâ€™s stronghold.
The Matero legislator said just like his constituency has vowed to give PF 100 percent vote in Tuesdayâ€™s election, Kasama too and Northern Province as a whole should give the party 100 percent vote.
Mr Kambwili said PF is not a tribal party because it has accepted to support Mr Lungu to replace late President Sata.
â€œWe are not a tribal party and we have justified by being united in accepting Edgar Lungu to take over late President Michael Sataâ€™s mantle,â€ Mr Kambwili said.
And Mr Yaluma said people of Northern Province should not listen to unjustified campaign messages.