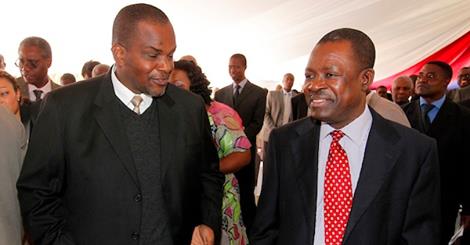 JIMMY CHIBUYE, Lusaka
GOVERNMENT has described as baseless accusations by Rainbow Party president Wynter Kabimba that it is framing Director of Public Prosecutions (DPP) Mutembo Nchito to cover up former President Rupiah Bandaâ€™s alleged criminality.
Chief Government spokesperson Chishimba Kambwili said in a statement yesterday that the accusations are not only baseless but also unexpected of a man of Mr Kabimbaâ€™s background.
Mr Kabimba is former Patriotic Front (PF) secretary general and Minister of Justice.
Mr Kambwili, who is also Minister of Information and Broadcasting Services, said he was responding to the accusations with great reluctance and reservation because Mr Kabimba is â€œdesperate to grow his partyâ€.
He said even if Mr Kabimba is trying to grow his party, that should not be done at the expense of lies against Government to win â€œcheapâ€ political mileageâ€.
Mr Kambwili wondered what wrong Mr Kabimba has seen in the PF when six months ago he truly and rightfully defended the partyâ€™s impeccable record of good governance, rule of law, protection and promotion of fundamental human rights.
â€œI put it to Mr Kabimba that by attacking the PF, he is merely politicking and that there is no iota of truth in what he is saying,â€ he said.
Mr Kambwili said President Lungu is leading a disciplined and law-abiding Government that will never stoop low to prescribe to the courts of law, let alone law enforcement agencies, who to arrest and who not to arrest.
â€œI, therefore, want to put it categorically clear that Government has no hand whatsoever in the arrest of DPP Mutembo Nchito yesterday, as it has no hand in the arrest of any citizen for that matter,â€ he said.