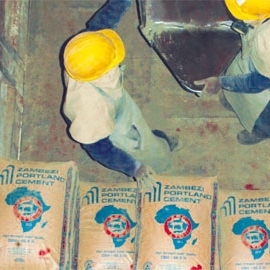 NKOLE MULAMBIA, Ndola
GOVERNMENT is pleased with the assurance that 550 jobs will be secured at Zambezi Portland Cement in Ndola following a Lusaka High Court decision that has seen the Ventriglia family retain 100 percent ownership of the company.
The court recently quashed a deportation order of 2012 with the owners of the cement manufacturing company, Antonio Ventriglia and Maunela Sebastiani, with their three children deported to Italy.
The Ventriglia family that will now manage Zambezi Portland Cement will continue with cement production, a move that has cheered Government, according to Copperbelt Province permanent secretary Howard Sikwela.
Reverend Sikwela, who was speaking after touring the plant yesterday, said operations at the firm have continued normally, contrary to reports that there was confusion and operations had stalled.
â€œWe received quite disturbing reports that there was confusion at the plant.Â  As Government, we wouldnâ€™t want any interruptions.
From the findings, the reports are not true as there is peace and everything is normal,â€ he said.
RevÂ  Sikwela urged management to keep up the good work and ensure that no jobs are lost.
â€œSo far so good, there is no disturbance of any kind apart from legal issues concerning the current and former management,â€ he said.
The decision by the High Court rendered the former management of Finsbury Investments Limited illegal.
Company executive director Gomeli Litana said the firm will soon issue a comprehensive statement on the position of the company.
â€œWe will issue a comprehensive statement. Audits are currently going on mostly over contracts and customers. We have done the tour together and there is no unrest, it is business as usual,â€ he said.