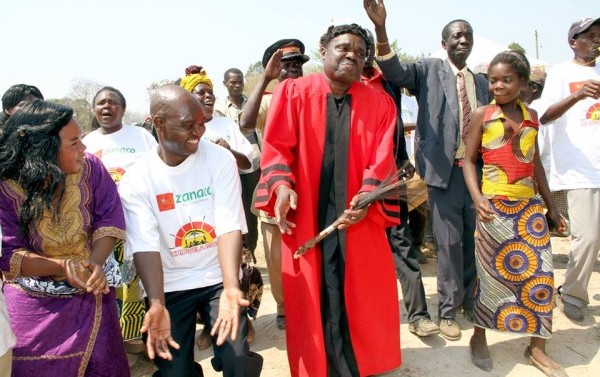 From BILKE MULENGA in Mansa
GOVERNMENT is working hard to better the lives of Zambians, says Bahati member of Parliament Harry Kalaba.
Speaking in Mansa on Friday, Mr Kalaba said all campaign promises will be fulfilled adding that Bahati constituency has also been earmarked for various developmental projects.
â€œWe are working very hard to ensure that we give you what we promised during the 2011 elections. As you can see, just in the three years that we have been in office, we have done a lot of projects that the previous government never did,â€ he said.
Mr Kalaba, who is also Minister of Foreign Affairs, addressed two separate meetings in Kapili and Katakwe.
He reminded people not to be detracted by those peddling lies that PF was not going to deliver on its promises.
Meanwhile CHAMBO NGâ€™UNI from Kabwe reports that Lala and Swaka traditional leaders in Central Province are happy with President Sata for visiting them and discussing development programmes in their districts.
President Sata recently held a meeting with 12 traditional leaders from Mkushi, Chitambo, Luano and Serenje in Mkushi at Chalata Secondary School on the sidelines of the Ichibwelamushi traditional ceremony.
Ichibwelamushi Cultural Association chairman Mwila Kunda said yesterday in an interview that the traditional leaders commended Government for the developmental projects taking place in their respective areas.
The traditional leaders, among them Senior Chief Mboroma, Chief Muchinka, Chief Mulungwe, Chief Chitina, Chief Kanyesha and Chief Mailo, highlighted to the head of State problems being experienced in their chiefdoms.
Other traditional leaders who attended the meeting were chiefs Chibale, Serenje, Kabamba, Kaudula, Chikupili, Chisomo and Chibunka of Chinsali district.
â€œTheir royal highnesses were very excited by the visit of President Sata. They felt honoured that President Sata held a meeting with them,â€ Mr Kunda said.
He said the traditional leaders, whose chiefdoms are in Mkushi, Luano, Serenje, Chitambo and Kapiri Mposhi districts, want to be fully consulted on matters of land and development in their chiefdoms.
He said it was the first time that President Sata was meeting the traditional leaders in Mkushi on the sidelines of the Ichibwelamushi traditional ceremony.