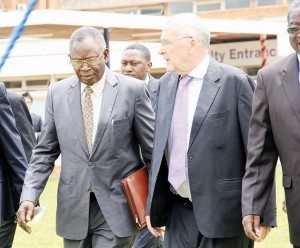 STEVEN MVULA, Lusaka
VICE-PRESIDENT Guy Scott says the Patriotic Front (PF) has no affinity for political patronage when appointing people to positions of authority in Government-owned companies.
Dr Scott said this in Parliament yesterday during the question and answer session.
He was responding to Kabompo West member of Parliament (MP) Ambrose Lufuma (UPND), who wanted to know if Government will appoint people to the Industrial Development Corporation (IDC) on political grounds.
â€œMMD was known for political patronage but it appears the PF is worse. What assurance do we have that the recently set up IDC will not be politicised by the PF?â€ Mr Lufuma asked.
Dr Scott responded that staff at IDC will be strictly technical.
â€œThe IDC will not fall in the pitfall which brought down UNIP and MMD,â€ Dr Scott said.
He said the IDC is being supervised by Cabinet office and PF has had no hand in it.
â€œUNIP and MMD lost control of this country because of political patronage and so PF does not want to fall into this trap,â€ Dr Scott said.
And Dr Scott is concerned that civil servants are used to talking and attending workshops at the expense of working.
He said this in response to a question by Kabwata MP Given Lubinda (PF), who wanted to know when the Lusaka city project of turning garbage into money would start.
Meanwhile, Dr Scott says he is not worried about being fired.
He was responding to Chembe MP Mwansa Mbulakulima (MMD), who wanted to know if he is worried about being fired since he reportedly revealed that there are people who allegedly want to oust him from his position.
â€œThat is a personal question, which I could duck but to answer your question, I am not worried of being fired,â€ Dr Scott said.