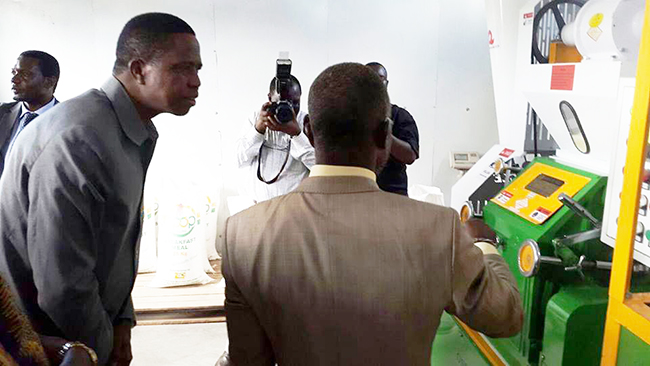 North-Western Province.
Provincial permanent secretary Ephraim Mateyo said Government, through the Zambia Cooperative Federation (ZCF), will soon start installing the solar hammermills in Chikenge, Chikonkwelo and Katendwa areas.
Mr Mateyo said this is in an effort to add value to the maize bumper harvest the country has recorded over the years.
“Government, through the presidential milling plants initiative, has allocated three solar milling plants in your chiefdom and these solar milling plants will be managed by the local cooperatives,” he said.
Mr Mateyo said this in Chikenge when he called on Chief Kalunga at his palace.
He said the installation of the solar-powered milling plants will bring competition in the maize milling industry and help lower the price of mealie meal.
“A technical team will soon visit the stated areas to conduct site selection in collaboration with the beneficiary cooperatives,” Mr Mateyo said.
He implored people in the chiefdom to increase on their production in order to sustain the operations of the milling plants and enhance household food security.
“I urge all the farmers in the chiefdom to diversify in terms of agriculture,” Mr Mateyo said.
He said Government will continue to provide an enabling environment to allow the local people realise their potential in agriculture through value addition.
“Now that North-Western Province is connected to the national electricity grid, Government will continue to facilitate and attract agro-processing industries to process our locally produced agro raw materials,” Mr Mateyo said.
He also implored farmers in Kabompo to invest in livestock production because of the readily available market for livestock products such as goats in the Middle East and Saudi Arabia in particular.
And Chief Kalunga appealed to Government to expedite the process of upgrading the 11km of selected township roads in Kabompo to bituminous standard.
“The township roads are impassable and we are concerned with the unexecuted works of tarring our township roads,” Chief Kalunga said.