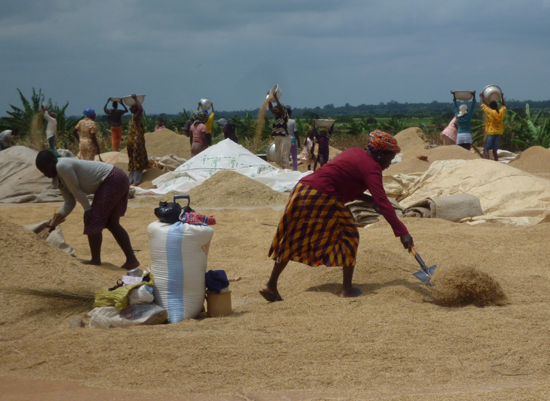 By CHRISTINE CHISHA
GOVERNMENT has acquired trucks to collect rice throughout the country to avoid wastage.
Minister of Agriculture and Livestock Wylbur Simuusa said in an interview on Friday that Governmentâ€™s policy is to ensure that farmers who grow rice do not feel left out.
â€œThis government has placed emphasis on positive agriculture policies and will ensure that rice is collected from farmers throughout the country,â€ he said.
And Mr Simuusa said the Food Reserve Agency (FRA) met its target of buying 500,000 metric tonnes of maize within three weeks of opening the crop marketing season.
He said the buying of the 500,000 metric tonnes of maize in a short space of time confirms the bumper harvest recorded for the 2013/14 farming season.
Mr Simuusa said with the overflow of maize, millers have no excuse not to reduce mealie meal prices.
â€œI am still challenging the millers to explain why mealie meal prices are still high when maize is in abundance,â€ he said.
Mr Simuusa said when the supply is high the demand is low because if they use the force of supply and demand the price is brought down and the millers should be able to explain the high mealie meal prices.
He said last year maize was not in abundance and the floor price was at K65 per 50kg bag of maize but millers were buying maize between K75 and K80 per bag of the same quantity.
Mr Simuusa said this year a 50kg bag is priced at K75 and maize export is allowed.