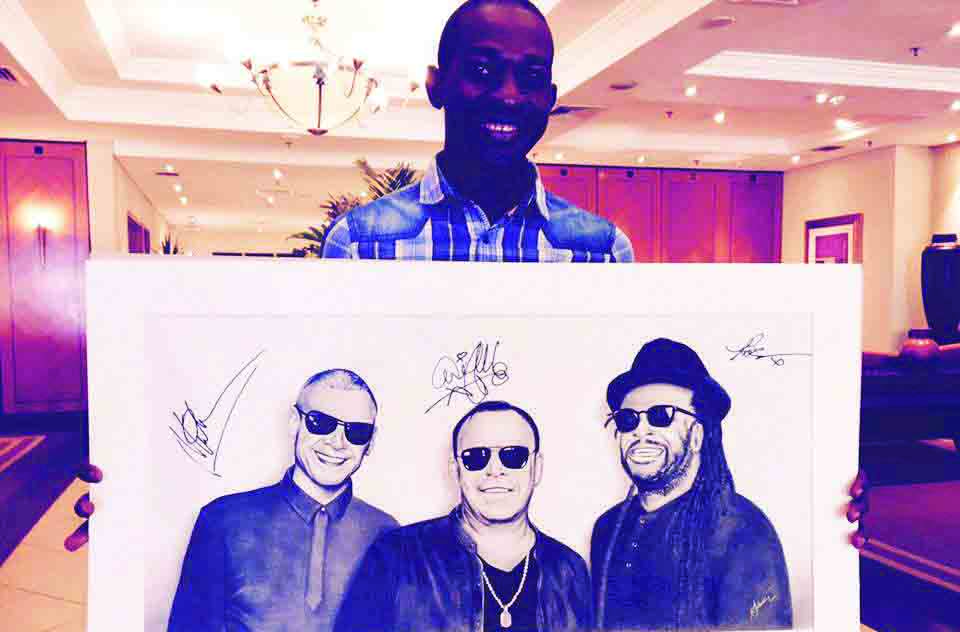 LUSAKA â€“ Stanbic Bank Zambia has extended the deadline for its closed bid auction for an autographed life-like drawing of one of the worldâ€™s iconic music groups, UB40, to allow its customers more time to place their bids. Proceeds from the auction will support charities and the talent behind the art.
The drawing by 23-year-old Silvester Mali was inspired by the Stanbic 2016 Jazz Festivalâ€™s main act featuring the platinum-selling band, with its original line-up of Ali Campbell, Astro and Mickey Virtue, and is currently on display at the Stanbic Bank Private Banking Suite at Taj Pamodzi Hotel in Lusaka.
â€œWe are excited to share this piece of art with our customers and jazz enthusiasts. It is not every day that you get to have an item autographed by such an iconic jazz band. Itâ€™s also interesting to see how the different forms of art inspire and influence each other. We see this painting as a blending of two art forms and the fact that it came from a young artist goes to show just how timeless art can be in influencing generations,â€ says Stanbic public relations and communications manager Chanda Chime-Katongo.
The art drawing made its debut at the 2016 Stanbic Jazz festival where it got raving reviews from the festival goers. However, it was UB40â€™s reaction that hit home for the young artist. He describes his encounter with the three artists as â€˜awesome, humbling and overwhelmingâ€™ as they were both amazed at the portrait and encouraging.
â€œI thought of doing something in relation to what UB40 are putting across what I do in connection with the music. Their music has impacted generations and their songs date back to before I was even born, but you can still see how it just lives on. My thought was to do something inspirational that would also live on and my art is basically a vision of what we hear or what Iâ€™ve heard about their songs,â€ said Silvester.
With no prior professional training, save the technical drawing and art classes he undertook in secondary school, Silvester is a self-taught art prodigy with a deep love for art and wildlife art in particular; a passion that found its way to the surface at the age of 14 with the young artist landing his first major project working on a calendar for charity two years later.
Silvester hopes to use his talent to inspire fellow youths to follow their dreams and also to do more charity work even as he grows as an artist.
â€œWe look forward to finding a home for the portrait and meeting the new owner come closing day,â€ said Katongo on a lighter note.
Part of the proceeds raised from the auction will go to Kuchetekela Foundation which educates underprivileged children from grades seven through to twelve, with the remainder going to Silvester.
Interested bidders may place their closed bids at the Bankâ€™s Private Banking Suite at Taj Pamodzi Hotel or the nearest branch, or the Stanbic Bank Zambia Facebook page via direct message with â€œStanbic Artâ€ followed by the bid amount in Kwacha. All bids are to be submitted by December 31, 2016, and results to be announced on January 30, 2017.Â Â  LANGMEAD & BAKER