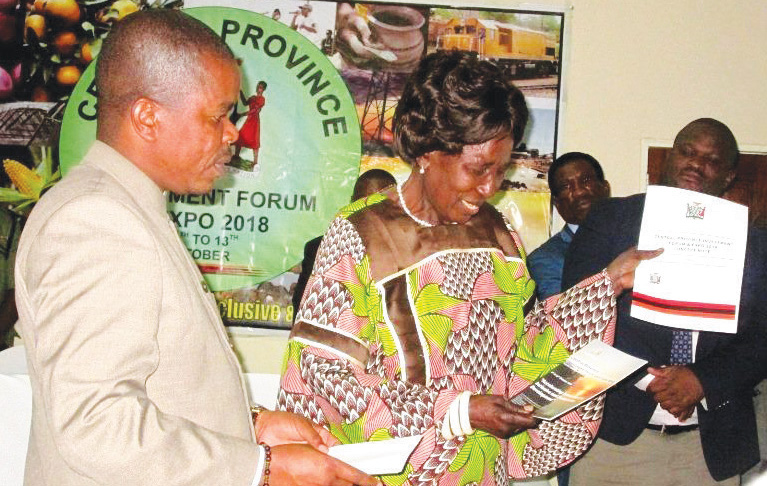 CHAMBO NG’UNI, Kabwe
THIS week, attention of the Zambian business community will focus on Mulungushi University, where the Central Province Investment Forum and expo is being held.
The Expo is being held under the theme: ‘Accelerating Investment for inclusive and sustainable development’. The six-day event comes after the expo held in Luapula Province last year.
Government is using the expo as a vehicle to propel investments in areas such as agriculture, agro-processing, tourism, manufacturing, energy, mining, infrastructure development and forestry.
Central Province Minister Sydney Mushanga, regional permanent secretary Chanda Kabwe and other stakeholders are hoping to use the expo to attract investment in the resource-rich central region of Zambia.
Mulungushi University, the venue of this prestigious investment marketing event, is a unique place with a long impressive history.
The university hosts the mystic Mulungushi Rock of Authority acclaimed as the birthplace of Zambia’s independence.
It is at Mulungushi Rock of Authority where political events that have shaped the political, economic, labour and religious course of Zambia, have taken place since the pre-independence days.
But how did Mulungushi Rock of Authority, a revered place in Zambia, come into being?
When the United National Independence Party (UNIP), a Zambia National Congress (ZANC) breakaway political party, wanted to have a conference, the members picked the secluded rocky area near the Mulungushi River, north of Kabwe.
The place was ideal because it was near a river and away from the watchful eye of Northern Rhodesia’s colonial authorities.
UNIP under the leadership of Zambia’s founding President Kenneth Kaunda and other nationalists held a conference in 1960 which attracted 2000 delegates.
Former UNIP secretary general Grey Zulu is among the people credited for having sighted the place later to be known as Mulungushi Rock of Ages and now famously known as the Mulungushi Rock of Authority.
Then UNIP Mkushi constituency party secretary Joseph Katampi said the 1960 conference put UNIP on the political map.
The conference helped UNIP become a major political party in Northern Rhodesia as the struggle for independence gained momentum.
“When we gathered at Mulungushi Rock, we resolved to take any course of action by using any means to indicate our seriousness about independence to the white government … we resolved not to compromise with the British government’s interest of giving us the Macleod Constitution but a constitution that allowed one man one vote,” recalled Mr Katampi.
After Zambia gained her independence in 1964, the place became a preferred venue of political meetings.
Here major political and policy speeches have been made by UNIP, the Movement for Multiparty Democracy and the Patriotic Front (PF).
Of the many speeches, the famous 1968 Mulungushi Declaration or Mulungushi Reforms made by Dr Kaunda stand out.
Dr Kaunda declared his Government’s intentions to nationalise key foreign-owned enterprises which were placed under the control of Industrial Development Corporation.
“Being here today (November 6, 2017) is a profoundly moving experience for me. As many of you may be aware, these grounds where the university is situated have special significance for me and for our country as well.
“I recollect that it was here that United National Independence Party crafted the master plan that led to independence in 1964,” Dr Kaunda said with nostalgia.
Dr Kaunda said this after Mulungushi University honoured him with a degree of Doctor of Philosophy.
“It was here that bonds of friendship which led to the formation of the ‘Mulungushi Club’ were forged with leaders such as Julius Kambarage Nyerere of Tanzania and Milton Obote of Uganda,” Dr Kaunda recalled.
To give the rock of authority impetus, at the 1968 conference, Dr Kaunda’s government made a decision to establish President Citizenship College (PCC) in Mulungushi area.
Dr Kaunda opened PCC in 1974 as an institution for labour studies and to provide leadership training to officers in Government, parastatal organisations and the labour movement.
PCC’s core values were to inculcate values of humility, selflessness and public services among leaders.
“The core values of national unity, patriotism and Zambian humanism that guided UNIP in the first three decades of Zambia’s independence were developed where Mulungushi University stands,” Dr Kaunda added.
“I would dearly love to see Mulungushi University become the rock on which we can further build our “One Zambia, One Nation”.
PCC was in 1994 transformed into National College of Management and Development Studies (NCMDS).
On December 31, 2007, Government repealed the NCMDS Act of 1972 and issued a statutory instrument declaring NCMDS as Mulungushi University.
Before Kapiri Mposhi became a district in 1994, Mulungushi Rock of Authority was under Kabwe, Central Province’s capital.
President Frederick Chiluba declared Kapiri Mposhi as a district. Mulungushi River is the boundary between the two districts.
Whether by design or not, the Central Province administration is hoping that by holding the investment forum and expo at Mulungushi University, a spell of good fortune needed to catapult the region into Zambia’s industrial hub will be unlocked.
Mr Kabwe said Mulungushi University is hosting the expo because it is strategically located and has adequate infrastructure.
Mr Kabwe says the university hosts Mulungushi Rock of Authority, an important heritage site for Zambia.
“At Mulungushi University, that’s where we have four conference centres which will be used for business-to-business meetings for each sector such as agriculture, agro-processing and tourism,” Mr Kabwe said.
He said two venues were initially considered in Kabwe but they did not match Mulungushi University in terms of infrastructure and location.
“Facilities at Mulungushi University are ideal for business-to-business meetings which will be handled by Zambia Development Agency and other institutions,” he said.
He said the Central Province Investment Forum and Expo is expected to attract close to 200 exhibitors and 500 delegates.
Mulungushi Rock of Authority is synonymous with the Mulungushi Reforms, events held by UNIP, MMD and PF (such as election of President Edgar Lungu as PF party president) that have shaped Zambia’s direction.
Will it be synonymous with Central Province Investment Forum and Expo and the good fortune that will come out of it?