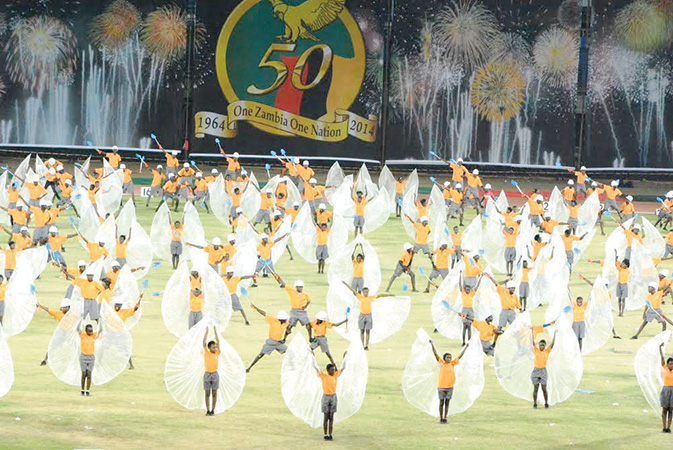 It is a day everyone should pause and reflect on
CHARLES CHISALA – Lusaka
TODAY Zambiaâ€™s citizens bow in supplication to thank God for His protective hedge around the country for the last 50 years.
Yes, they are prostrating themselves before their creator with humility, full of gratitude for the peace the nation has enjoyed since 1964 when it broke and threw away the chains of colonial rule.
It is a day everyone should pause and reflect on the transformation the nation has gone through in the last 50 years.
But there is something about this golden jubilee. Indeed this jubilee is not only for Zambians but for the entire southern Africa because of the role the country played and the sacrifices its people made to liberate the region.
The scars of that support to the liberation wars in Southern Rhodesia (Zimbabwe), Angola, Mozambique, Namibia and South Africa are too conspicuous not to be noticed in many parts of Zambia.
For this reason, it is safe to say that the golden jubilee is not only for Zambia but the entire southern Africa.
This is the message from former Botswana president Festus Mogae, who said the celebrations are of great significance to the citizens and the entire southern Africa.
The African Indaba, which provides information on southern African history and current affairs, trains the spotlight on Zambiaâ€™s support for the regionâ€™s liberation movements between 1964 and 1979.
â€œThe support Zambia gave to the liberation movements of southern Africa is a strong theme in Zambian history and national identity; the lengths to which they aided the various movements came at a great cost in terms of human life, infrastructure and lost opportunity for economic growth,â€ the Indaba writes, quoting the Livingstone Museum.
Zambiaâ€™s first President Kenneth Kaunda was at the centre of the liberation of its neighbouring countries.
After fighting the ill-fated federation of Rhodesia and Nyasaland he led the Cha Cha Cha campaign of civil disobedience against the Northern Rhodesian government, bringing the regime to its knees.
The Indaba says Zambia was born into a difficult situation.Â  It was a landlocked country surrounded by minority white regimes in Angola, Mozambique and Southern Rhodesia; it had a troublesome Congo to the north and Apartheid South Africa in the south, which regional power had a long stretch.
The new republic inherited an economy that was completely dependent on copper and thus at the mercy of global copper prices, and was almost entirely run by whites and foreign businesses.
The country was also at this time dependent on the unreliable Benguela Railway, which ran from the Copperbelt westwards through Angola to the port of Lobito on the Atlantic Ocean.
Zambiaâ€™s only ally in the region was Tanzania and its president Julias Nyerere who, too, was committed to supporting liberation movements, but had the luxury of a long coastline and a more robust and varied economy than Zambia.
To the west was the Portuguese colony of Angola, which had three nationalist movements fighting Portuguese forces for independence:
Jose Eduardo dos Santosâ€™ Movimento Popular de LibertaÃ§Ã£o de Angola (MPLA); Jonas Savimbiâ€™s UniÃ£o Nacional para a IndependÃªncia Total de Angola (UNITA); and Holden Robertoâ€™s Frente Nacional de LibertaÃ§Ã£o de Angola (FNLA).
Indaba Africa explains that all these movements conducted their early operations from outside Angola, leading Portuguese forces to conduct devastating cross-border raids into Zambia.
â€œTo the south-east was Mozambique, another Portuguese colony experiencing an anti-colonial guerrilla insurgency, most notably from Eduardo Mondlaneâ€™s Frente de LibertaÃ§Ã£o de MoÃ§ambique (FRELIMO).
â€œMalawi and Tanzania were not sympathetic towards FRELIMO, leaving Zambia as their only option to set up bases in.
â€œTo the south was Ian Smithâ€™s Rhodesia, with Joshua Nkomoâ€™s Zimbabwean African Peopleâ€™s Union (ZAPU) and Ndabaningi Sitholeâ€™s and Robert Mugabeâ€™s Zimbabwe African National Union (ZANU), the two main liberation movements,â€ Indaba Africa says.
It explains that Zambia had been playing host to these two movements since 1963, but even this early their presence in Lusaka proved unpopular, with Zambian youths wrecking ZANUâ€™s offices in response to ZANUâ€™s accusations that ZAPU was receiving preferential treatment from the Zambian government.
Zambia also gave support to the South West Africa Peopleâ€™s Organisation (SWAPO) of what is Namibia today, and the African National Congress (ANC) of South Africa, although the latter of these two would be more active in Zambia in the 1980s.
As a result of this overt support to the guerrilla movements the country suffered numerous commando raids and air strikes by combined South African and Rhodesian forces.
It is one of those raids that Zambia lost one of its most talented broadcaster and musician Alick Nkhata.
Some people have partly blamed these sacrifices for the economic and social fallout that plagued the country in the 1980s and 1990s.
It is not just Zambiaâ€™s golden jubilee. It is a southern African jubilee.