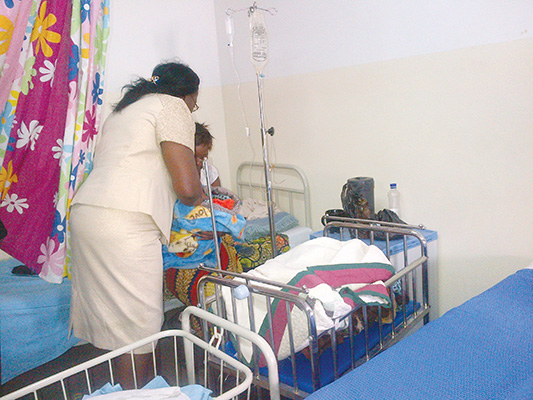 BUTTYSON KANDIMBA – Solwezi
ABOUT 57 health workers at Solwezi General Hospital are owed about K1.8 million by Government in unpaid long-service bonuses from 1995 to date.
The affected workers were employed in the civil service under the medical board.
According to a letter of complaint by the affected workers addressed to the hospital management and obtained by the Daily Mail yesterday, the workers are asking Government to pay them their long-service bonuses.
The workers claim they have been pursuing the money from the time the board was abolished.
â€œWe the health workers at Solwezi general hospital wish to seek your help pertaining to our long-service bonus from 1995 to 2014, when we were employed by the civil service under the medical board.
â€œSome of our colleagues from other health institutions have been paid their money but for us here, there is nothing and we are asking our government to pay us our long overdue benefits,â€ the letter reads in part.
The workers are owed money ranging from K25,000 to about K63,000.
North-Western Province Health Workers Union of Zambia (HWUZ) provincial chairperson Whatson Mulubwa said in an interview that the union is aware of the arrears owed to the workers.
Mr Mulubwa said the union is concerned about the colossal amount of money owed to the workers and appealed to government to dismantle the debt.
â€œIf government allows the money to accumulate without offsetting, it will create problems in future as some workers are about to retire,â€ he said.
HWUZ provincial secretary Peter Mulenga said in a separate interview that the union has been holding consultative meetings with government on the matter.
Mr Mulenga appealed to the workers to remain calm as government has shown willingness to offset the debt.
â€œGovernment is not refusing to release the money, rather it has shown willingness to offset the debt from the meetings we have had so far,â€ Mr Mulenga said.