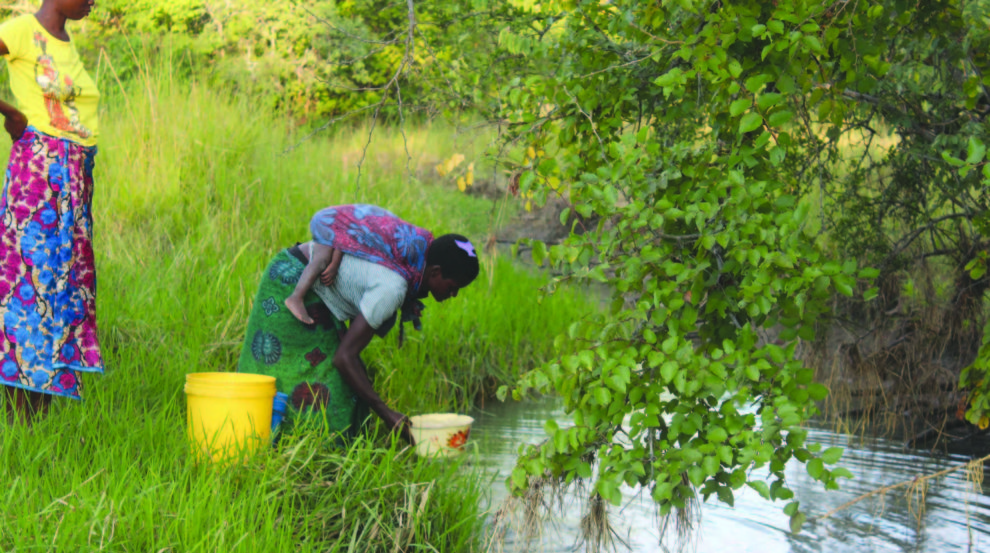 JIMMY CHIBUYE, Choma
RINA Musaka is a 52-year-old woman living on the outskirts of Itezhi-Tezhi district who used to walk over 40 kilometres daily to fetch clean water for home use.
She woke up as early as 03:00 hours to embark on a 40-kilometre journey to Muyasani primary school, the only place with a borehole.

Like many other inhabitants of Mbila ward and other surrounding areas of Itezhi Tezhi, Mrs Musaka would only return home in the afternoon.
Waking up at 03:00 hours and retuning after 15:00 hours meant Mrs Musaka and others abandoned their household chores, left their families, animals and gardens unattended to.
The story of Mrs Musaka is not different from that of 39-year-old Bubala Hiyamwa, a farmer, who recounts how stressful it was to fetch water for his family and cattle.
Mr Hiyamwa said his cattle died due to thirst as most of them went two or more days without water.
He said whenever he went to fetch water, he would go with his cattle so that the animals could quench their thirst from the well.
Mrs Musaka, Mr Hiyamwa and many others were left bewildered by the continued shortage of water in their village despite good amounts of rainfall during some years.
“The journey to fetch water was a nightmare for me because I had to completely abandon my chores to get water for domestic use. Up to now I don’t understand what causes our watering holes to dry up even after good rainfall,” she narrates.
To the delight of Mrs Musaka and her colleagues, Government through the Strengthening Climate Resilience in Kafue Sub Basin (SCRiKA) project, has embarked on sinking solar-powered boreholes and so far one has been drilled and four more are yet to be done.
What the residents of Mbila ward do not know is that the shortage of water, uneven rainfall partners and the continuous dry spells are effects of climate change.
Climate change is widely recognised as one of the major challenges facing humankind today.
To address climate change, which is now a global issue, the United Nations Framework Convention on Climate Change (UNFCCC) was adopted in 1992 with the objective of stabilising Green House Gases (GHGs) concentrations in the atmosphere to a level that would prevent dangerous human induced interference with the climate system.
Countries world-over are formulating and implementing measures to mitigate climate change by addressing anthropogenic emissions of GHG and facilitate adaptation to its impacts.
On September 25, 2015, UN member countries adopted a set of goals to end poverty, protect the planet, and ensure prosperity for all as part of a new sustainable development agenda.
Each goal has specific targets to be achieved over the next 15 years.
Goal number 13 of the Sustainable Development Goals (SDGs) talks about taking urgent action to combat climate change and its impacts.
Zambia has developed a National Policy on Climate Change to provide a framework for coordinated response to climate change issues.
The document gives guidance on how the Zambian economy can grow in a sustainable manner and thereby foster a smooth implementation of the nation’s development plan and subsequently achieve the Vision 2030.
Vice-President Inonge Wina launched the document on May 3, 2017 saying Government is conscious of the serious threats posed by climate change to poverty alleviation and the consequent attainment of the Vision 2030.
The government has also put in place other measures to combat climatic changes and promote sustainable growth.
One such measure is the SCRiKA project which is being implemented with the support of the African Development Bank (AfDB).
The objective of the project is to foster sustained economic growth, reduce poverty and enhance food security through strengthening the adaptive capacity of 800, 000 rural communities.
SCRiKA is being implemented at a cost of US$38.72 million in 11 districts of the Kafue basin namely Namwala, Kalomo, Choma, Monze, Mazabuka, Kafue, Chibombo, Itezhi-Tezhi, Mumbwa, Shibuyunji and Pemba.
The primary beneficiaries include vulnerable rural farmers that often suffer climate related losses and vulnerable groups that depend on natural resources for their livelihood.
The people of Mbila ward in Mango village are the first beneficiaries of the solar-powered boreholes costing about K150, 000 and Mrs Musaka was not in a position to hide her joy.
“I have never drunk water coming out of a pipe. I am happy because the terrifying hours of walking to fetch water for my family have finally come to an end,” she said.
Dr Evans Mwengwe, acting manager for the SCRiKA project, his office has received about 110 proposals for the drilling of the solar-powered boreholes projected to cost about K1.6 million in Itezhi Tezhi.
Dr Mwengwe said it is no longer a secret that climate change has impacted many aspects of the environment and it is important to adapt to the changes caused it has caused.
Interim Climate Change Secretariat (ICCS) is the brainchild of the government created to establish long-term institutional arrangements for climate change and to coordinate, in the interim, all climate change activities in Zambia.
Communication and administration manager Chama Nambeya said that climate change impacts are long term and require long term interventions and that adaptive capabilities must be built in communities, institutions and infrastructure.
It is said water is life but fresh, clean and safe water is necessary for the survival of all living organisms on earth.
But if the adverse and devastating effects of climate change on provision of water are not addressed today, the consequences will be harsher for future generations.