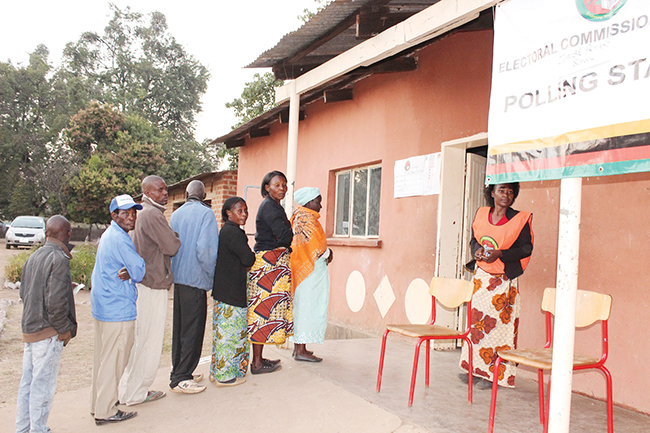 HAVING been so accustomed to violence reports during elections, it is such a relief that the Milenge by-election campaigns in Luapula have been incident-free.
The Milenge by-election, in which voters elect a council chairperson today, have been surprisingly peaceful and pleasantly so.
Many Zambians have been concerned about escalating political violence, especially during elections.
In the eyes of many citizens, elections have become synonymous with violence. This is because of the bad precedents set in the past.
Many elections that have been held in the past, including the 2016 general election, were characterised by some measure of violence.
Some people have been injured during elections, and in a recent incident, a life was lost.
Traumatic memories are fresh about the violence that took place recently in Kaoma where a man reportedly died of gunshot wounds.
The Sesheke by-election is yet another election which was characterised by horrific scenes of violence.
As a result of the violence experienced in the recent past, many have expressed fear that 2021 may be bloody if nothing is done to change the situation.
There is hope, and lots of it, that peaceful elections can be held. The Milenge by-election has set a good example that holding peaceful elections is possible after all.
For some observers, however, it is no surprise that the Milenge polls have been peaceful. They argue that generally elections or by-elections held in strongholds of the governing Patriotic Front (PF) are peaceful.
They contend that the opposite is true when such polls are held in areas where the opposition United Party for National Development (UPND) has a strong base.
Recent elections give credence to this line of thought. The question then is: why is this so?
This is a question that requires a wholesome answer or answers. The earlier the answers are found, the better.
Politicians and their cadres have no excuse for perpetuating violence. And in fact the power to stop violence lies squarely on their shoulders.
If political leaders are resolute on ending violence, it will surely be a thing of the past.
It takes political will to end violence. What have the political parties done differently this time for peace to prevail? That’s what they must continue doing even in future elections.
Very soon Chilubi will hold a parliamentary by-election following the death of the incumbent, Rosaria Fundanga.
It is hoped that politicians will use the opportunity to build on the legacy in Milenge. It will also be an opportunity to allay fears many Zambians have about future elections, particularly 2021.
It is time politicians realised that there is no value in violence.
Actually violence has never been a solution to any problem because it does not only injure those targeted but the perpetrators as well.
In violence there is no winner, but only losers. The sooner politicians and cadres come to terms with reality, the better.
It is a known fact that violence tends to deter voters from participating in the electoral process. This leads to voter apathy, which disadvantages the very people seeking votes.
Indulging in violence as a way of campaigning is therefore retrogressive and is tantamount to shooting oneself in the foot.
Needless to say, violence undermines democracy because many people are disfranchised due to violence.
Besides injuries and deaths, violence leads to loss and underdevelopment because of the damage on properties and infrastructure in some cases.
It is therefore expected that the precedent set in Milenge will be maintained for all future elections.
It is also hoped that the peace observed in Milenge so far will continue even after voting and announcing of results.
We expect those who will lose the election to be magnanimous enough to accept the results and congratulate the winners.
It is also expected that the winners will celebrate in a mature way not to anger those who will be grieving over the loss.
All in all, the responsibility to end violence and safeguard life lies in the hands of political leaders.
Going forward we expect political parties to respect and uphold the Peace Pact signed, with a pledge to end violence.
We do not expect cadres to carry weapons, neither do we expect political parties to ferry cadres from other towns to the election area. These have been cited to be some of the major causes of violence.
Political parties and all stakeholders should start now to build up to a peaceful 2021 election.

Clean up society of guns
Buildings must be safe