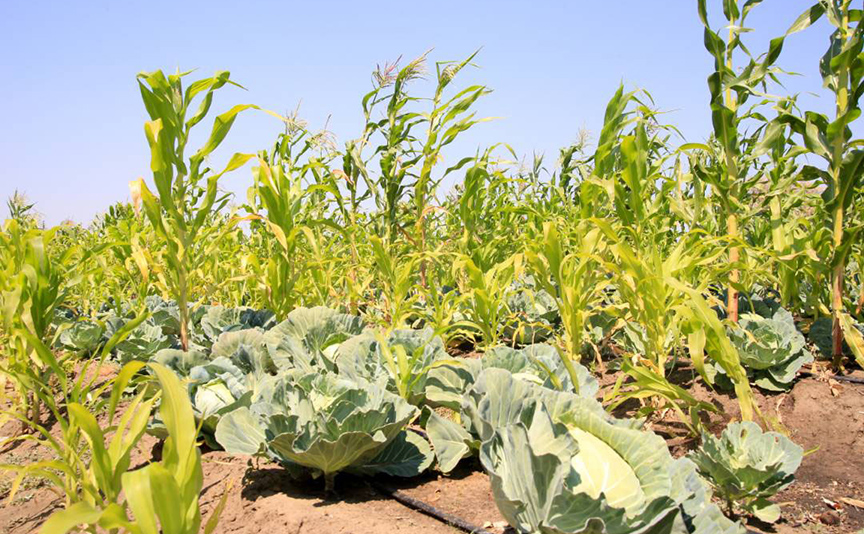 MARGARET CHISANGA, Sioma
A FIELD with rows of winter maize interspaced by huge sumptuous looking cabbages is a site for sore eyes in the undulating series of fossil sands that make up most of Western Province’s landscape.

The field belongs to Sipalo Mubita, who has been using integrated farming techniques introduced to farmers in selected parts of Sioma and Sesheke by the World Wide Fund for Nature (WWF) six years ago.
“My whole life has revolved around farming, so I can testify to seeing massive changes in my yields since I started using this farming system through the WWF project. To begin with, I am able to have a good harvest from a small piece of land whereas before, my farming system involved moving from field to field in search of fertile virgin land, but now I use the same field every year,” he said.
Mr Mubita is addressing members of the Zambian Parliamentary Caucus on Conservation (ZPCC), who are in the province on a tour of agricultural projects that conserve natural resources and can still deliver more stable and higher yields.
ZPCC is an initiative of members of Parliament (MP) inspired by a belief that conservation is a fundamental component of sustainable development, poverty alleviation, conflict prevention, good governance and regional security so as to promote sound, long-term policies of sustainable land, forest, water and biodiversity management.
The entourage comprises Luapula Province Minister Nickson Chilangwa Southern Province Minister Edify Hamukale and MPs for Sesheke (Frank Kufakwandi), Bangweulu (Anthony Kasandwe), Nangoma (Boyd Hamusonde), Nchelenge (Anthony Malama) and Ikeleng’i (Elijah Muchima). Sioma MP Mbololwa Subulwa also joins the tour in her constituency.
Dr Hamukale, who is an agriculture expert by profession, chips off a part of a maize stock and expertly inspects the fields. He seems excited by the project.
“I will tell you one thing, you should have added a little bit more fertiliser in this area, but this is good, very good,” he says as he inspects the field more closely by cutting off leaves and holding them closer for inspection.
WWF Governance and Partnerships manager, Mwape Sichilongo, said over the last six years, the organisation has observed that not only has the yield improved, but the activity has become a source of alternative income, contributing to household economic empowerment and also climate change resilience.
“Two key objectives of the intervention were to improve yields at household level and to reduce the need to clear new forests for agriculture,” he explains as the entourage moves to Sikuka village.
Mr Sichilongo explained that WWF introduced the project after realising the need for agricultural practices that conserve natural resources, which are climate change resilient and capable of delivering stable and higher yields.
The project thus involves access to improved seed and incorporating soil and moisture conservation intervention in the agriculture practice.
In Sikuka village, Samba Lukombo shows the MPs a modern storage facility called felumbu, which has been constructed for longer preservation of grain and protection from rodents and elephants.
A felumbu is an elephant-proof grain shade. It’s shaped like a giant upturned mug made of bricks and cement, and holds up to a ton of maize. Unable to smell the contents inside, elephants just wander past them.
“After practising this new form of farming, we realised that we were having bigger yields and there was need for bigger and stronger storage facilities. Through aid from the project, we started constructing these facilities which are bigger, and sealed in such a manner that rodents and other pests will not affect the maize,” he said.
Sesheke MP Kufakwandi said he was happy that the technology had been accepted by the community.
“I am impressed that the training has sunk deep in the minds of the people judging from what they have been able to explain to us, if this can be passed on to the next generation, then we can be assured that the province will be protected from massive effects of climate change,” he said.
The Barotse Royal Establishment assured the MPs that the farming practice would continue because it has brought positive change in the lifestyles of the affected areas.
“There are other positive side effects on the agriculture integrations. Since very little time has been spent on the farm, what is happening now is that the input needed from the children is less, meaning that they are now able to go to school and even participate in other activities,” said the area’s acting Mutundwalo, Mulala Mubita.
One of the success stories is told by one of the local farmers, Musenuho Kaumba, who said that after involving herself in the agriculture integration, her yield has increased and she has been able to sell some of her yield to WWF, and was able to make a profit of over K10,000 last year.
However, challenges remain plenty, and the onus is on as many Zambians as possible to begin to curtail unsustainable small scale farming practices.
Mr Chilangwa, who is chairman of the caucus, urged WWF to ensure the project is spread out to other parts of the country.
“Since the project aims to yield more, on a smaller piece of land, so that the farmer does not cut through the forest to affect the environment and also does not get involved in poaching to affect the animal life, it is vital that the concept is spread out to other parts of the country,” he said.
Mr Sichilongo said with a full backing of ZPCC, which is a crucial and strategic partner in sustainable natural resource management, it is expected that the diets of millions of people and resource plans will improve through adaptation to conservation agriculture.