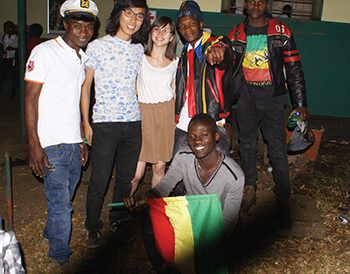 KELVIN KACHINGWE, Lusaka
THE Peter Tosh memorial show got underway at Mundawanga Botanic Gardens in Chilanga last Saturday, and as expected, Green Party president Peter Sinkamba used the occasion to champion his views on marijuana.
It was a lengthy lecture.
Peter Tosh would have been impressed with his namesakeâ€™s take on marijuana; in any case, he was also concerned about the economy and not just getting high on ganja.
His plan is simple; legalise cannabis for medicinal use in the country, and export the surplus crop to earn some foreign exchange. For him, what is at stake is the diversification of the countryâ€™s economy while cleaning up the environment which has been damaged by years of opencast mining.
And he has done his mathematics; he reckons the country could capture up to 10 percent of the global marijuana market, an estimated US$140 billion as per the 2005 United Nations calculations.
Anyway, the Peter Tosh memorial show was about remembering a legend, and that is exactly what happened.
The attendance was good, and so were the performances.
Some of the musicians that performed include Iâ€™nâ€™I, Bongo Far-I, True African, Burning Youth Tukuza and the new band on the block, One Drop.
Iâ€™nâ€™I opened first, playing â€˜Stir It Upâ€™ which Bob Marley composed for his wife Rita in 1967 and was then made popular by Johnny Nash. They then followed it up with Black Uhuruâ€™s â€˜Utteranceâ€™ and before ending it with Peter Toshâ€™s very own â€˜Equal Rightsâ€™.
It was a fitting selection, but so was that by One Drop.
They kicked off with two Peter Tosh songs â€“ Stepping Razor and Magga Dog before switching to Stop that Train which was originally done by Clint Eastwood and ended with Bam Bam, which was firstly done by Toots and the Maytals.
One Drop, a group of young musicians that veteran Brian Shakarongo has put together, has Ras Rodigan (lead singer), Chichi (bass guitar), Steve (guitar), Chomi (drums) and C-Rib on vocals.
Shakarongo, who is also music director of the group, does percussion and backing vocals. But at Mundawanga, they were joined on two songs by the proverbial vocalist Bongo Far-I on backing vocals.
The band has been together for only two months but Chichi has been with the group for only a month and Steve for two weeks.