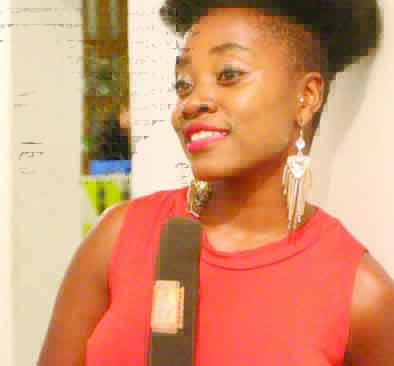 NKOLE NKOLE, Lusaka
IT WAS a short but sweet affair last Saturday when independent artiste, Chembo, hosted a listening party held at Modzi Arts, which is situated at the Swedish School in Lusakaâ€™s Longacres.
Chembo hosted the party at no cost to encourage fans of her music to attend it and shared this in a tweet prior to the show which read: â€œI just want it to be free, you know. I know itâ€™s not ideal capitalism but somehow it means lots if someone who only has transport to come, comes.â€
The singer used the show as an opportunity for her fans to sample music from her independently produced EP titled Love vs Reality.
A popular track on the EP is called Hey Mama which Chembo performed an acoustic version, featuring Stan on guitar. She crooned boldly to the audience: â€œBeauty, brains, class, oh yes, I got it from my mama!â€
The track is Chemboâ€™s personal tribute to her mother, who has been a central figure in her musical pursuit.
Chembo also performed the single Abena Mavis acoustically for the audience.
She released it earlier in the year and also took time to explain the issues the song discusses.
The song touches on those who have affairs with married people, warning them not to be involved in such scandals.
A short-spoken word piece performed by Chembo is featured on the EP and another is done by Aero5ol for the project.
When the song Tightrope was sampled during Saturdayâ€™s show, Chembo described it as her heaven and her hell. â€œThis is a song which came out of the worst experience of my life so far,â€ she shared.
She eventually opened the stage to questions from the audience and explained that the EP took a total of three months to get done.
â€œI chose the songs that I thought made the most sense for the concept of the EP,â€ she shared further.
She told her cluster of fans that she is kept going by the vision she has for herself as an independent artist while her inspiration to write songs comes mainly from people she catches in random situations.
Chembo was selected to perform for the first time at the acclaimed Lake of Stars festival in Malawi last month, an experience she says changed how she sees things and showed her how much she wants to work with full bands.
Operating as an independent artiste, however, means she has the advantage of not being tied to any studios or producers as a result.
Her EP, which contains five songs and two spoken word pieces, was done over three months and explores the theme of love versus reality.
â€œMy next project is going to be the best thing youâ€™ve ever heard,â€ she promised her fans at the end of the EP sampling.