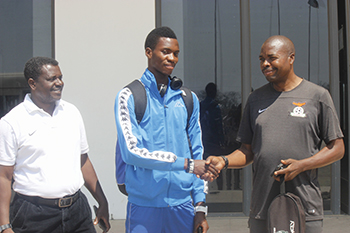 ROBINSON KUNDA, Lusaka
COACH Fighton Simukonda has drafted Lumwana Radiants midfielder Gozon Mutale into the under-23 national team preparing for the 2015 Senegal African Championship.
Mutale was co-opted following his impressive performance during the Barclays Cup quarter-final match against Zanaco at Lusakaâ€™s Nkoloma Stadium on Sunday, where he was voted-man-of-the-match.
Zanaco thumped 10-man Lumwana 3-0 to qualify for the semi-finals.
Simukonda described Mutale as a good player, who deserves a place in the junior Chipolopolo.
The Nchanga Rangers trainer said the team needs to prepare adequately because the African Under-23 Championship is a big tournament.
Simukonda believes his charges will excel in Senegal and qualify for the 2016 Rio de Janeiro Olympic Games.
And Mutale is happy to be included in the team.
â€œI am very happy to be called. I never thought I could be considered. I am very happy,â€ he said.
The soft-spoken defensive midfielder pledged to work hard to cement a starting position.
â€œThis is an opportunity for me. I am going to work very hard. It is also an honour for me to be included in the team,â€ Mutale said.
Team manager Hastings Ndovi said all the players took part in yesterdayâ€™s training session at National Heroes Stadium in Lusaka.
â€œAll the players are here but Friday Samu and Paul Katema did not train with us today [yesterday] because they are not well. Friday has a sore on the foot while Paul has malaria,â€ Ndovi said.
The team is scheduled to break camp on Thursday.
Zambia have been pooled in Group A with South Africa, Tunisia and hosts Senegal, while Group B has Algeria, Egypt, Mali and Nigeria.
The tournament will run from November 28 to December 12.