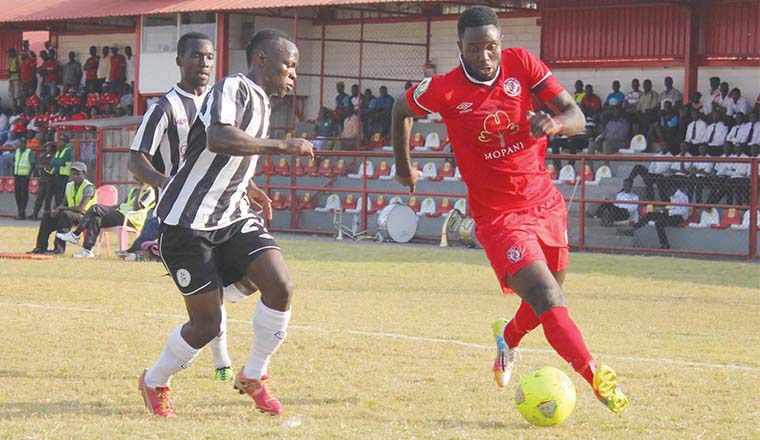 By HONE SIAME and ROBINSON KUNDA
BLADES 1 NKANA 0
REIGNING champions Nkanaâ€™s title aspirations yesterday suffered a setback when they lost to Konkola Blades in a rescheduled Super Division Week 17 match at Konkola Stadium in Chililabombwe.
It was a sad return for Nkana coach Beston Chambeshi, who dumped Blades a month ago for the Kitwe giants.
Striker Anos Tembo headed in a cross from Humphrey Maseneko in the 32nd minute.
The closest Nkana came to equalising was on 42 minutes when Ronald â€˜Sate Sateâ€™ Kampamba ballooned his close-range shot.
Nkana remained on 32 points, three better than Blades.
BUFFALOES 2 ASSEMBLY 2
Peter Mwaangani yesterday scored a brace as 10-man National Assembly came from behind to hold Green Buffaloes in a rescheduled Week 17 match at Woodlands Stadium in Lusaka.
Kennedy Chola converted from the spot kick on 18 minutes after Sam Simukonda hacked Felix Sunzu and referee Wellington Kaoma sent the Assembly player for an early shower.
Sebastian Mwansa doubled the lead from a free kick in the 31st minute.
But Mwaangani pulled one back on 42 minutes and equalised ten minutes into the second half after beating ball-watching Buffaloes defenders and shooting past goalkeeper Davy Kaumbwa.
Assembly have 26 points while Buffaloes have 24.