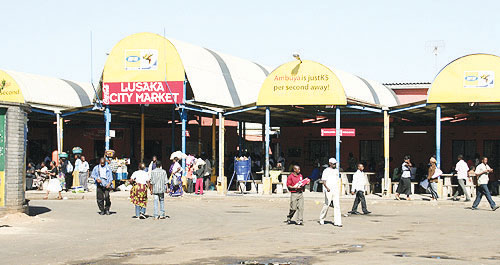 JESSICA MWANSA, Lusaka
FIRST it was the fire, then the cholera outbreak.
But while the fire affected mostly traders with stalls inside Lusaka City Market, the cholera epidemic roped in even the street vendors, who for a long time have seemingly enjoyed the freedom of the city, in a manner of speaking.

Drastic measures were taken by the government to stem the spread of cholera. The measures included removal of street vendors with the help of the defence forces, ban on public gatherings, which affected churches as well as schools. Operation hours for bars were also restricted.

Perhaps because of the men and women in uniform, the vendors largely co-operated. But due to frustration, the vendors have protested twice, with the first one involving mainly those based in Kanyama.
You can understand their frustrations; they earn their living on the streets. And the more they stay off the streets, the direr the situation becomes.
But truth be told, majority of the public do not want to see traders back on the streets. Without them, the streets are looking good and you smell some fresh air in the central business district (CBD).
Government is looking at accommodating the majority of them in City Market with the rest having to do with market space in the townships.
After Government made some space available in City Market last week, a scramble for space among the traders ensued.
Admittedly, the number of vendors is way too big than the space available.
A survey by the Lusaka City Council (LCC) in 1995 suggested that Lusaka had approximately 7,000 street vendors, some 3,000 of whom operated in the CBD. And with each vendor taking up around one square metre, some 3,000 square metres of CBD space was occupied by vendors, who were constructing two to five stalls per day.
Another 1997 estimate set the number of vendors at 12,000 in Lusaka, excluding the townships. While figures of the estimated number of vendors could not be obtained from the LCC public relations unit, whose phone went unanswered several times by the time of going to press, it is still easy to tell that the number is very high.
WHERE WILL THE VENDORS BE ACCOMMODATED?
Almost everyone is looking at City Market.
City Market, among others, is one of the largest modern markets in Lusaka situated at the far end of Lusaka town, sandwiched between the road going to Kanyama township and the one heading to Mumbwa.
The market feeds the community by offering distinct foods, products and services in an environment that perhaps best describes the Zambian entrepreneurial spirit.
A visit to this modern market shows that it is one of the busiest market places which remains congested with traffic going in and out from morning to sunset.
Apart from stationary traders with stalls, the market is also crowded with vendors selling all sorts of items like fruits, assorted medicines, roasted chicken, meat, sausage, fried fish, boiled eggs and soft drinks, among others.
Some even sell beer, albeit discreetly.
Some of the traders experienced some major losses in July and October last year when the market caught fire on two junctures.
The same October, a cholera outbreak was reported in Lusaka.
Initially, the Ministry of Health thought they had nipped it in the bud only for the cases to dramatically rise in December.
But after the several measures undertaken to stem the spread of cholera, life is slowly coming to normal.
Eyes are focused on the traders, whose anger you can feel when you talk to them.
Despite some trading spaces being allocated recently at City Market, most traders have been left unhappy.
Namukolo Phiri, 43, was among the lucky traders to be allocated trading space in the market. However, her joy carried some agony as LCC has not allowed fishmongers to trade until further notice.
“I am failing in my duties as a mother to supply my children with their necessities and schools are opening,” Ms Phiri says. “All I do is stay home and wait for nightfall, praying for better days to come.”
But some are able to trade at the market, which is demarcated in sections and named after colours such as purple, green, yellow and blue.
However, some traders are complaining of congestion.
“The market is congested inside and has no room to accommodate us, but we are told to squat on a 30cm table by two, which is not conducive,” Joshua Zulu says matter-of-factly. “We will continue vending outside the market because we have nowhere to go.”
The scramble for trading space was brought about by outside vendors within City Market, who have no stalls inside the market. The permanent stalls were assigned to old owners who hold identity cards also known as membership cards.
The scramble rose when the outside vendors were told to stop selling perishable products, especially tomatoes and fish.
Edward Chingamuka, who is Vendors Association of Zambia (VAZ) health and marketing co-ordinator, says when City Market was certified fit to reopen, most old traders did not show up to claim their stalls and were therefore replaced.
“About 1,700 stalls were allocated last week and 650 were accommodated yesterday [last week Thursday] bringing the total number to about 2,350 and leaving the number of vendors to about 2,000,” Mr Chingamuka says.
“The Lusaka City Council is working with the Ministry of Health and Immigration [Department] to make sure that all traders going back to the market are fine and that no foreigners are accommodated in the market.”
During the screening, only those with membership cards and National Registration Cards (NRC) were successful but Mr Chingamuka says those that lost them will be helped in the best way possible provided that they appear in their data base at the Civic Centre and they are Zambian.
“The vendors that usually carry their items either with their hands or on their heads, selling their merchandise within the market area, will also have to get membership cards as they will not be allowed to continue vending,” he says.
“This is so in order to prevent foreigners from trading in the market and ensuring that there is security provided.”