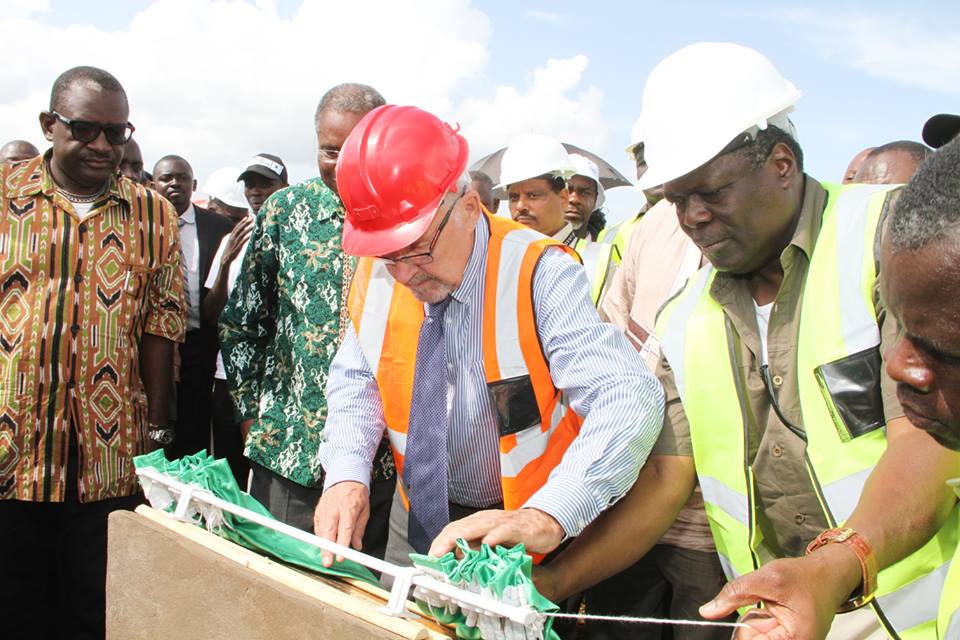 CHISHALA MUSONDA & CHRISTINE CHISHA, Masaiti
ACTING President Guy Scott says the high bar set by Kagem Mining Limited in tax remittance and its corporate social responsibility should be maintained as the emerald mining company last year contributed a combined US$40 million to the national treasury.
Dr Scott also said Kagemâ€™s US$36 million remitted in taxes last year surpasses what Zambia raised at the gemstone auctioning exhibition.
Speaking at the Zambezi Portland Cement (ZPC) Plcâ€™s official handover of 71 houses to displaced families in Senior Chief Chiwalaâ€™s area yesterday, the acting president said the mining firm has set a high standard in corporate social responsibility which should be maintained.
â€œA very good example is a few days ago when we visited Kagem who paid US$ 36 million as tax last year and at the same time they are spending US$5 million on the upgrade of a school and a clinic,â€ Dr Scott said.
Kagem are upgrading Chapula Secondary School and also renovating Nkana Health Centre in Lufwanyama.
Dr Scott also commended Senior Chief Chiwala for accommodating investment in his chiefdom, saying his discussion is always on business and how to develop.
And Dr Scott implored ZPC, which has a cement plant in Chief Chiwalaâ€™s areaÂ  to increase its production capacity after exceeding the 360,000tonne production last year.
â€œWe happily expect more production of 300,000-tonnes to 400,000 tonnes but why not go to 500,000 tonnes,â€ he said.
And Zambezi Portland chairman Rajan Mahtani said the construction project of the two-bedroom houses for the displaced families cost his firm US$2 million (about K12.6 million).
â€œAlthough the affected families identified at the commencement of the displacement exercise were 67, ZPC went beyond its agreed responsibility to relocate over 129 families. Seventy-one of these houses are being handed over today and others over the next two months,â€ he said.
The first phase of the project includes the building of the 129 houses and six boreholes.
Dr Mahtani said the second phase for the construction of three churches, a market and a clinic is expected to start soon.
ZPC is also offering one year insurance cover for the houses.
Senior Chief Chiwala said the building of houses in his chiefdom is a milestone in the development of the area and appealed to other investors to meet similar set standards for people and families being displaced.
And Dr Scott is hopeful that Zambia will pull through as a united front after Tuesdayâ€™s presidential election.
Dr Scott said he is confident that the Patriotic Front (PF) will win the election.
â€œI am sure our party will return to State House and our job will be to ensure that the country pulls together in unity.Â  We will overcome all the hurdles we have faced,â€ he said.
The acting president said this yesterday when he paid a courtesy call on Chieftainess Malembeka of Mpongwe.
Dr Scott said the PF is ready to continue with the works started by late President Sata as a united front.
He said he is happy to have met chiefs who are ready to dialogue with Government.
â€œIt is good to have traditional leadership that is ready to deliberate on issues affecting their chiefdoms. It is a sign of partnership that the government cherishes to develop the country,â€ Dr Scott said.
Chieftainess Malembeka is happy with the projects started by the PF government in her area.
â€œWe are happy with the youth skills development centre under construction because it will help our youths acquire skills after completing secondary school education,â€ Chieftainess Malembeka said.
She is also happy that small-scale farmers received D-compound fertiliser and seed on time and are just waiting for top dressing fertiliser.
Dr Scott was accompanied by Minister of Agriculture and Livestock Wylbur Simuusa, Minister of Youth and Sport Chishimba Kambwili, Mpongwe member of Parliament Gabriel Namulambe and other senior government officials.