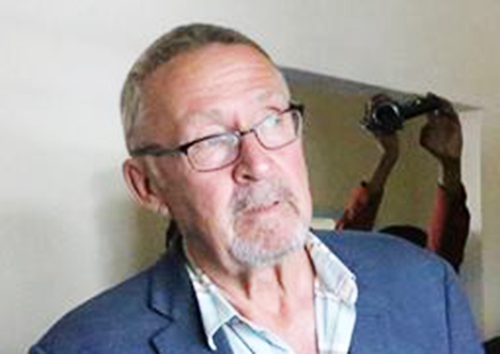 ALVIN CHIINGA, Lusaka & ZUMANI KATASEFA, Luanshya
PATRIOTIC Front (PF) chairperson for information Frank Bwalya has challenged former Vice-President Guy Scott to apologise or distance himself from disparaging remarks against the President attributed to him by The Post.
In a statement, Fr Bwalya said the alleged sentiments by Lusaka Central member of Parliament over Governmentâ€™s recently announced economic recovery plan were divisive and disrespectful to President Lungu.
He said it is imperative that Dr Scott should demand an apology and retraction from the newspaper if indeed he did not give them such a story.
Fr Bwalya said that if Dr Scott apologises, then the public will prove his innocence regarding the said statement.
â€œFailure by Dr Scott to do this will make it difficult for our members and the general public to believe his innocence. Given the foregoing, we wish to advise our members, especially senior members, to avoid patronising The Post to avoid complaints of being misquoted,â€ he said.
Fr Bwalya said that those who choose to give stories to The Post, which is clearly hostile to the PF, should be prepared for the wrath of the partyâ€™s members should they be found wanting.
He said PF members should not be quick to condemn senior members for their alleged negative statements published by the newspaper as his office will need to consult widely and verify comments attributed to the partyâ€™s members before responding.
Fr Bwalya also appealed to all PF members to heed the recent call by President Lungu to respect and love one another in order to build a united and victorious party.
But Dr Scott refused to comment, saying he would only do so after seeing Fr Bwalyaâ€™s statement.