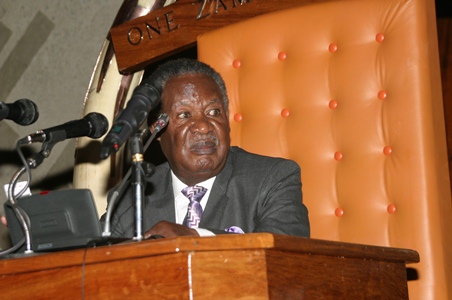 By TEDDY KUYELA
PRESIDENT Sata is today scheduled to officially open the Fourth Session of the Eleventh National Assembly where he will set out his administrationâ€™s policy priorities for next year.
Members of Parliament (MPs) will debate the policy statements contained in President Sataâ€™s speech over the next two weeks.
The House, which adjourned sine die on Wednesday, July 23, 2014, will resume sitting today for the commencement of the first meeting of the Fourth Session of the Eleventh National Assembly.
In the previous meeting, the House commenced its sittings on Tuesday, June 17, 2014 and sat for 21 days.
The main business of the House was the consideration of the various reports of the parliamentary committees.
During the last sittings, the House considered 275 questions for oral and written answer, debated 19 motions to adopt annual parliamentary committee reports, three select committee report and one private membersâ€™ motion.
In addition, nine ministerial statements were presented in the House while 42 papers comprising 19 annual parliamentary committee reports, three select committee reports and 20 annual reports from Government and quasi-Government institutions were laid on the table of the House.
At the end of the last meetingâ€™s business, the House considered and passed three Government Bills, which included the Excess Expenditure Appropriation Bill of 2011, the Supplementary Appropriation Bill of 2012, and the Zambia Chartered Institute of Logistics and Transport Bill and also provided for its powers and functions.
Following the six parliamentary by-elections that took place on August 19 and September 11 this year, the House is expected to administer oaths of allegiance to newly-elected members of Parliament (MPs) today.
The MPs are Mangangoâ€™s Rodgers Lingweshi (PF), Solwezi Centralâ€™s Dawson Kafwaya (UPND) and Kasenengwaâ€™s Victoria Kalima (MMD).
Others are Mkushi South MP Davies Chisopa (PF), Christabel Ngimbu (PF) of Zambezi West and Vubwiâ€™s Margaret Miti (PF).
The composition of MPs in the House is PF (82), MMD (37), UPND (32), Independent (two), FDD (one) and ADD (one).
Out of the total number of the MPs in the House, there are 19 women.
Minister of Finance Alexander Chikwanda is also expected to present the 2015 National Budget on October 10, 2014.
The budget speech will be followed by debates by MPs on the policy statements contained in Mr Chikwandaâ€™s speech. Thereafter, the House is expected to approve the budget for 2015 in early December this year.
Budget consideration and approval will be the main focus of the first meeting of the Fourth Session of the Eleventh National Assembly.
The House is also expected to pass a number of budget-related legislations to authorise the Executive to spend the 2015 Budget and to operationalise Government policy statements contained therein.
The bills will include, among others, the Appropriation Bill, the Customs and Exercise Amendment Bill, the Income Tax Amend