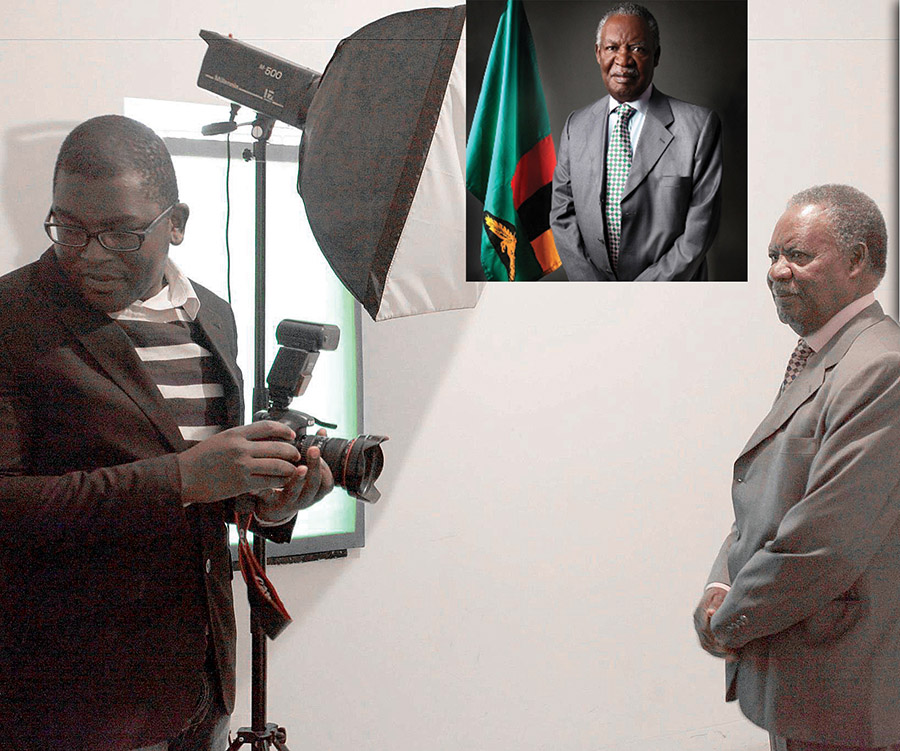 PRESIDENT Sata interacted with many people. In this feature our staffer NKOLE NKOLE writes about his interaction with a photographer.
FOR nearly a decade, Vatice Mushauko has been taking pictures of different people and capturing their most treasured moments frozen in time.
He has built himself a reputation as a photographer of choice by people of various backgrounds and in the process formed relationships with people of different standing in society.
In the public eye, President Sata was widely viewed as brash and unapologetic which had over the years earned him the nickname â€˜King Cobraâ€™.
But for Vatice Mushauko, who was tasked with taking images of the President from different angles during private occasions and personal moments, there was a softer side to President Sata that the public often did not get to see.
It was a privilege Vatice appreciated and one that allowed him a behind-the-scenes peek into the life of Zambiaâ€™s number one public figure.
â€œI started working with the President in terms of visuals in 2011 before the general election campaigns. I did most of the campaign images,â€ Vatice explained.
Soon after Mr Sata was elected President, Vatice was asked to do the official presidential portrait of Zambiaâ€™s fifth President.
President Sata would visit Vaticeâ€™s photography studio, Inzy, on Lusakaâ€™s Addis Ababa Drive for official photographs.
Vatice also took pictures of the President while in his private residence with his family.
â€œHe was a grandfather figure. I always felt he had a strong and intimidating presence but once you got to know him and work with him, you realised he had a big heart,â€ the Vatice shared.
In his different interactions with him, Vatice found President Sata an accommodating individual who would in the beginning be stiff in front of the camera.
He admits that President Sata was not the easiest of clients to work with but using experience and patience he would eventually manage to get him at the right angles.
It would often take some urging on Vaticeâ€™s part and a little bit more time to loosen President Sata up and get him to smile in readiness for a shot.
â€œIf you notice in a lot of the pictures I have, he is very lighthearted, so it also comes with the experience of working with a variety of people,â€ Vatice stated.
What he also discovered about President Sata through his interactions with him was that he was very humorous especially when around his family.
He was softest when around his grandchildren. Therefore Vatice found out that if you wished to coax the biggest smile from the President, having his grandchildren close by was not a bad idea.
â€œOne thing that I got to experience was the human side of him which was something a lot of people did not experience and which I wish was projected moreâ€ he said.
He was quite a nice man to be around and very direct, as Vatice recollected.
Also striking in the eyes of the public was President Sataâ€™s relationship with his wife, Christine Kaseba.
She seemed the perfect companion who was with him at critical moments of his life and even in death, she was notably by his side.
Some would state that Dr Kaseba made him look good and softened his rather rigid exterior. She was like the sun in his sky and his devoted life partner.
These were the observations made in the publicâ€™s eyes from a long distance view. In closer and more intimate settings, those observations were not inaccurate.
In Vaticeâ€™s eyes, the President and First Lady were a typical African couple. He could see the love between them even though publicly it was not too direct.
He observed that not only was Dr Kaseba a pillar in President Sataâ€™s success but he too was a pillar in hers.
Vatice shared: â€œThey seemed to need each other and one thing that I noticed as well was that he was soft towards her in a way people never got to see.â€
This particular demonstration of love reminded Vatice of the unique love between characteristic African parents being modeled right in front of him by Zambiaâ€™s first couple.
â€œWhen I was working with him I forgot he was the President, he was just that common, humble man,â€ Vatice stated.
And beyond it being an exclusive visual experience, Vatice remained with the memory that behind every famous face is the mere human with needs and flaws just like everyone else.

Lusaka: How the capital city has developed
â€˜Roastingâ€™ peacefully aboard Peace Soldier bus