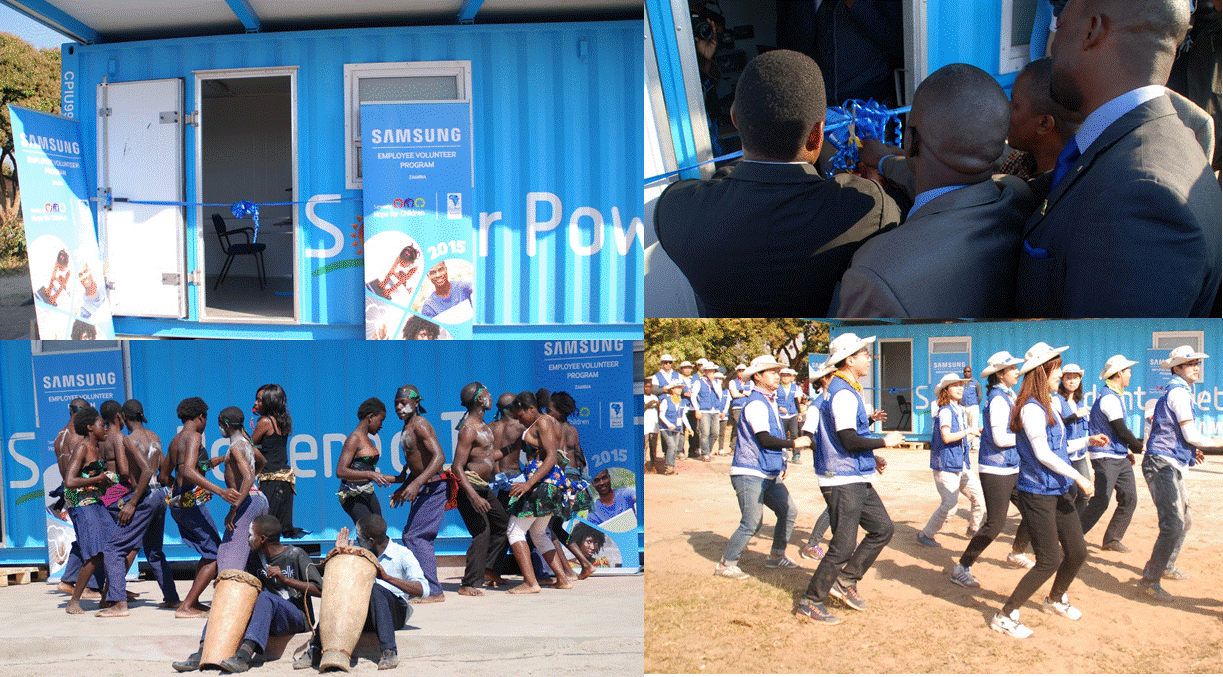 BENEDICT TEMBO, Lusaka
WHEN Faith Mutinta Simutende joined Samsung Zambia two years ago, little did she realise it was the beginning of her journey to doing community work.
Ms Simutende says the South Korean electronics companyâ€™s employee voluntary programme, which allows workers to serve in communities seven days a year, has changed her approach to life.
She has twice participated in the EVP in Kabwe, where Samsung was implementing a smart school programme with the launch of a Solar Powered Internet Schools (SPIS).
Besides being there in her role as the firmâ€™s head of corporate communications, Mutinta played with school children while teaching them as well as being the link between the children and a team of volunteers from South Korea.
She said her interaction gave hope to the children.
â€œThe Samsung EVP programme has given me a platform as an individual to connect with the community. When I see joy on the little boys and girls as well as the old men and women, that melts my heart and gives me a sense of satisfaction that I am contributing to making peopleâ€™s lives better always looking forward to doing more to make communities stand on their own feet,â€ Ms Simutende says.
She says two EVPs (2014 and 2015) have been unique in their own way.
In case of the Kabwe EVP, she gave out keys to an old lady who became a new home owner.
â€œThat gave me a sense of fulfilment,â€ she says.
In Shiwangâ€™andu in Muchinga Province, Ms Simutende said EVP remains memorable because of the excitement exhibited by the head teacher who led the teaching staff, students and community at the three schools in songs of joy as the SPIS was being installed.
She was moved by the joy and laughter by the children.
At the Kafue EVP at Nangongwe clinic, she coordinated the health screening and treatment of 300 people a day.
The climax was when an elderly man had minor foot correctional surgery and was able to use his foot again.
Kafuta Mulemba, the business development manager who joined Samsung Zambia in 2013, has been conducting information and communications technology and electronics training during EVPs.
Other EVPs he has done with Samsung include accompanying Korean doctors to Nangongwe clinic in Kafue as well as in Chongwe.
EVPs are part of Samsungâ€™s corporate citizenship programmes in Zambia, which aim to bring positive solutions to a variety of issues around the world.
One of the programmesâ€™ main focus areas is education, which has seen Samsung develop educational programmes that fit the needs and circumstances of the respective community.
One such programmeâ€™s is the Samsung smart school programme, which has launched SPIS at Hamududu school in Kabwe, Zambiaâ€™s first fully functional SPIS.
In addition, the facilitation of another has begun and three in Shiwangâ€™andu.
Samsung partnered with the Ministry of Education and Habitat for Humanity Zambia.
In case of Shiwangâ€™andu Secondary School, which also has an SPIS, the partnership was between the ministry, Samsung, Airtel and the Zambia Information and Communications Technology Authority (ZICTA).
By repurposing shipping containers into classrooms and utilising solar panels on its roofs, students are able to have access to computers and the internet in areas where electricity is sometimes unreliable or even non-existent.
These projects bring to attention the cardinal role of education in Zambiaâ€™s development.
Education satisfies a basic human need for knowledge, provides a means of helping to meet other basic needs and helps sustain and accelerate overall development.
It is a means through which knowledge, skills, and productive capacities of the labour force can be realised.
These are timely projects as they come when the Ministry of Education introduced ICT in the school curriculum.
Samsungâ€™s contribution underscores Governmentâ€™s concerted efforts to involve public and private enterprise as a way of improving access to and quality of education, especially that the projects target rural areas.