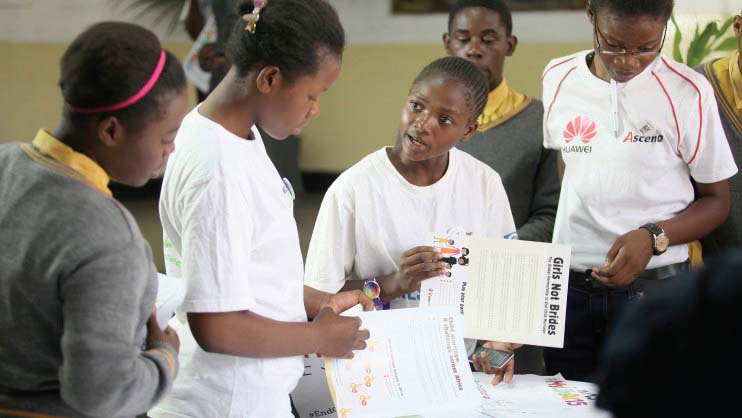 BENEDICT TEMBO, Ezelwini, Swaziland
ILIAMUPU Chipasha is happy that the Southern African Development Community Parliamentary Forum (SADC-PF) has finally adopted the Model Law on Eradicating Child Marriage and Protecting Children Already in Marriage.
A survivor of child marriage, Ms Chipasha witnessed the 39th plenary assembly meeting in Swaziland, SADC-PF adopt the first ever model law on child marriage in the region which will require member states to harmonise their national laws to prevent child marriages in support of the African Union Campaign to End Child Marriage in a Generation.
â€œI had my first child at the age of 15. She is seven. She will be eight in October. I will be like the father and mother. It breaks my heart each time I hear of child marriage,â€ Ms Chipasha, a second-year student at the University of Zambia, said.
Ms Chipashaâ€™s happiness is shared by Chief Chikanta of the Tonga people in Kalomo, who has devoted his time and energy in eradicating child marriage in his chiefdom.
Chief Chikanta said he has been sensitising community members on the dangers of child marriages, which has included retrieving those already in marriages and taking them back to school.
He said so far, 100 boys and girls have been rescued from early marriages and are now back in school.
â€œWe have volunteers breaking away from [early] marriages. Even boys who married early after dropping out of schools are getting back to school,â€ Chief Chikanta said.
To cater for the demand for education, Chief Chikanta said he is working with education authorities to introduce adult education in a number of schools.
The chiefdom has recently seen a 68-year-old man return to school and efforts are being made for him to be enrolled at a college of agriculture.
Chief Chikanta said he is making arrangements to have the man become an agent for one of the seed companies as a way of empowering him.
The traditional ruler said the adoption of the model law on eradicating child marriage and protecting children already in marriage has energised him.
One of the role models in eradicating child marriage, Chief Chikanta, who is also chairperson of the Southern Royal Foundation said he will embark on a sensitisation campaign through administrative structures in his chiefdom.
He wants all headpersons in the 321 villages to know about the model law.
â€œSince I have a copy, I will ask stakeholdersâ€™ like the UNFPA (United Nations Population Fund) to facilitate a stakeholdersâ€™ dialogue so that by the time the law is domesticated (by Government), I will have sensitised Southern Province chiefs and headmen,â€ Chief Chikanta said.
The model law adopted last Friday in Ezulwini, Swaziland, is designed to provide guidance to parliamentarians, ministries of justice, policymakers, and other stakeholders in SADC countries as they develop national laws.
â€œThe model law will address the most common problem of inconsistencies and gaps in the laws which weaken the sanction mechanisms available to law enforcement agencies across the regionâ€, says Roland Angerer, Plan International regional director for Eastern and Southern Africa.
The model law eliminates several loop holes that make current laws ineffective and unenforceable including parental and judicial consent, and conflicts between customary and statuary laws.
Child marriage affects 70 million girls in the world.
The east and southern Africa alone harbours seven million child brides. The SADC-PF and other partners developed the model law in response to the high prevalence of child marriage in southern Africa, which is largely driven by high poverty levels, gender inequity, traditions, religion, and limited educational opportunities for girls.
â€œChild marriage mostly affects girls in rural areas, the uneducated or under-educated and those from the poorest households in SADC and other African countries. It is, therefore, a glaring evidence of societal failure to provide equal protection, opportunities and services to all adolescentsâ€, noted Ms Justine Coulson, UNFPAâ€™s deputy regional director for East and Southern Africa.
â€œThe involvement of civil society and girls affected by child marriage is critical to ensuring the SADC model law helps protect millions of adolescent girls who face child marriage.
We are pleased to see that young girls, civil society organisations and advocates will soon have the backing of the law to end a practice which deprives millions of girls of the future they deserve,â€ added Ms Heather Hamilton, interim executive director of Girls Not Brides.
SADC-PFâ€™s efforts to develop and adopt a regional model law has been supported by the United Nations Populations Fund (UNFPA) East and Southern Africa regional office, Plan Internationalâ€™s 18+ Ending Child Marriage in Southern Africa programme, United Nations Development Programme, the Association of European Parliamentarians with Africa, the Southern African Litigation Centre and Girls Not Brides: The Global Partnership to End Child Marriage.
The process to develop the model law started in 2015 and has involved wide consultations with various stakeholders in SADC member States at regional level including those affected by child marriage, parliamentarians, ministries of justice, civil society organizations and human rights commissions.
â€œAs partners, we applaud SADC-PF for its commitment and fore sight by adopting this best practice model law which will protect millions of adolescent girls from the negative consequences of child marriage. We now have to implement, implement and implementâ€, stated Ms Nyasha Chingore of the Southern Africa Litigation Centre.
The plenary assembly is the highest decision-making body of the SADC-PF, the deliberative forum that brings together national parliaments from 14 SADC member states and approximately 3,500 Parliamentarians.
The theme of the 39th Plenary Assembly was â€œStrengthening Parliaments role in the protection and realisation of human rights in Southern Africaâ€ was held from May 28 to June 7 in Ezulwini, Swaziland.