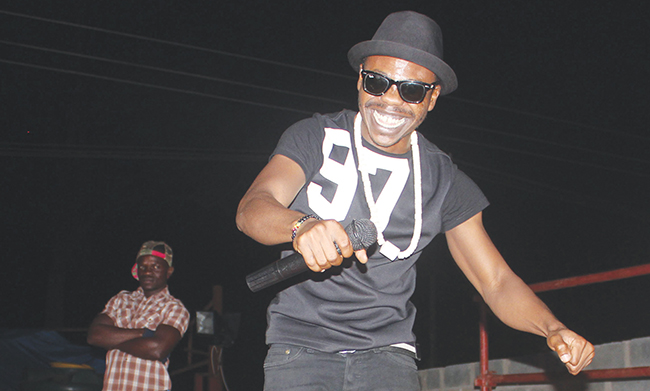 MULWANDA LUPIYA, Kitwe
REVELLERS last Friday defied the cold weather to catch Lusaka-based artiste Ruff Kaida in action at the ever lively Club Leelove in Kitweâ€™s Buchi township.
The cityâ€™s popular nightclub treated its usual patrons to a free show dubbed Jive with the Kopala Students and the club was full to capacity as patrons turned up in numbers.
The gathering received the diminutive rapperâ€™s presence on the stage with loud cheers.
The revellers were in a dancing mood throughout the night.
Ruff Kaida took to the stage at exactly 00:40 hours and set it â€˜on fireâ€™ with hit after hit from his albums.
He began by unleashing Kachabe chabe from his recently released Naked Truth album, much to the satisfaction of his fans.
Ndine Mfumu, Mwansa Mwasana, Chikalila, Ichilibwe Chakale, Bwete, I love My Life, MKV and Inkonto were among the many tracks that Ruff Kaida unleashed.
But he reserved the best for the last and delivered what patrons kept clamouring for since he took over the stage from another artiste, Eric Toyatoya, who warmed the stage for him.
The most demanded song was none other than Nikamisiya, a track which features the late P Jay.
The track sent the revellers agog as they sang and danced along.
Ruff Kaida also asked the crowd to light their phones in the sky while he was doing the track as a sign of showing respect to P Jay.
He left the stage after an energetic performance around 01:45 hours as patrons continued imbibing their favourite beverages with the resident DJ providing the music till 05:00 hours.