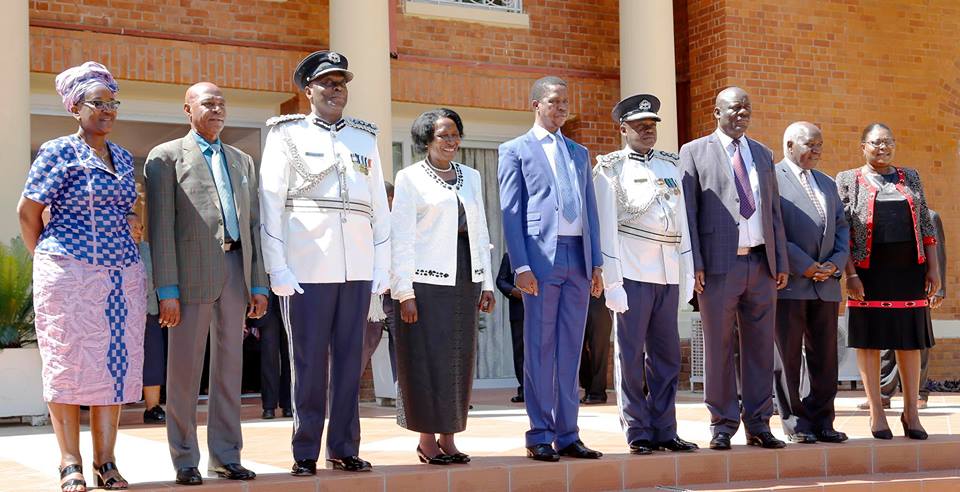 CHIMWEMWE MWALE, Lusaka
PRESIDENT Lungu has directed newly appointed Inspector General (IG) of Police Kakoma Kanganja to root out criminals masquerading as political party members to foster peace ahead of the 2016 general elections.
He has also directed Mr Kanganja to engage political parties in the country over the administration of the Public Order Act by the police.
Mr Lungu said some people, both in the ruling and opposition political parties, have been perpetrating crimes in the guise of being party members.
He said this yesterday at State House when he swore in Mr Kanganja as the IG of Police and Mr Eugene Sibote as the deputy IG, in-charge of administration.
Also sworn in yesterday were Dr Auxilia Ponga as Ministry of National Planning permanent secretary for monitoring and evaluation and Nalishebo Imataa as chief administrator-judiciary.
President Lungu said he is concerned that political parties have been infiltrated by some criminals.
He said police should not allow any masqueraders from political groupings who are criminals or criminally inclined to be perceived as politicians.
Mr Lungu said there is nothing special about people who commit crimes and belong to the Patriotic Front (PF) or United Party for National Development (UPND) and that they must be arrested.
â€œI am saying this because I have seen that our politics are contaminated by bad elements that gravitate from one political party to another as it gains ascendancy to the seat of power. People who brought down UNIP were vigilantes, most of whom were criminals, and people revolted.
He urged police to engage political party leaders to enhance law and order through the Public Order Act.
Mr Lungu said police have a duty to protect both members of the opposition and ruling parties.
â€œI know we also have bad elements on the side of the ruling party, but we can engage them through the sober ones so that we achieve a win-win situation where you are able to do your job as police.
â€œThe police have officers-in-charge countrywide and they know the â€˜hot eggsâ€™ in the political communities and they can talk to them and tell them to cool down. Otherwise we are One Zambia One Nation,â€ he said.
President Lungu is confident that the police under Mr Kanganja and Mr Sibote, whom he described as efficient and highly qualified, will ensure peaceful campaigns and elections in 2016.
He said police must engage political parties and avoid being accused of being biased towards the ruling party.
â€œI deliberately chose you because we are going into an election. Zambian elections have been known to be fairly peaceful, but this time around I want you to make them very peaceful,â€ President Lungu said.
He said he has observed a growing trend of complaints, especially by politicians, about the administration of the Public Order Act.
â€œI want to believe that if you engage them [politicians] and explain to them why certain things could not be done, they will be confident that you are not biased.
â€œBut if you show that you are too much of PF and you donâ€™t care about what happens to them, you risk evoking their wrath, which is always the case. They also want to show you they have the rights to assemble, to march and so on, in the end you end up having unnecessary friction.
â€œThere are some hot eggs in these political parties but choose the sober ones and be with them to influence the bad eggs so that at the end of the day, we achieve law and order,â€ Mr Lungu said.
On the appointments of Dr Ponga and Ms Imataa, President Lungu said he is happy that Zambia is making strides towards the Southern African Development Community target of having 50 women representation in decision-making positions.
He urged the duo to continue being an example to young girls, who must be inspired that â€œthere is life beyond marriageâ€.
â€œThey [girls] will only look to you if you do the right thing and you are there for them. We cannot improve our women if we leave them behind and we cannot improve our people if we leave our women behind because the women are the anchor of the nation,â€ he said.
Mr Lungu urged the duo to perform effectively and ensuring service delivery in their ministries.
â€œThe success of these ministries will depend on how you attach yourselves to the roles of these two ministries. I would urge you to do your best and I will be monitoring your performance from a distance because I do not want to be accused of interfering with the judiciary,â€ he said.
Mr Kanganja said he will work according to the task by engaging stakeholders and ensuring peaceful campaigns and elections.
He said police will call for meetings with political parties and explain to them how to conduct themselves.
â€œI want to thank the President for the confidence he has shown by appointing me to the biggest job in the Zambia Police. I promise that I will work according to the task; we will be fair but very firm and if people work along the Public Order Act, we will ensure a peaceful and quiet election,â€ Mr Kanganja said.

Zesco to light up West