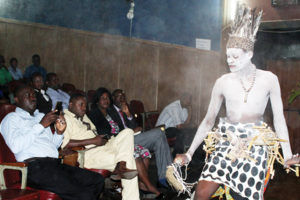 NICHOLAS KAWINGA
Lusaka
RODGERS Mwewa, put to rest on Tuesday at Lusaka’s Memorial Park Cemetery, was not just Mwansabombwe Member of Parliament, but a seasoned theatre arts promoter and producer who really enjoyed time in the arts.
Rodgers, as fondly known, truly will be greatly missed, by the fraternity for his consistence and aptly measured generosity to the thespian arts.
Wherever this art-man was and worked, theatre had just to be there, or had to be introduced as a way to celebrate a people’s culture, and caringly so, as a means of empowerment to the youth through employment creation.
Even for Parliament, he once sat on the Information and Broadcasting Committee, therein, radio and TV drama production are part of menu.
From 2002 – 2003, Rodgers was involved in the arts business of the Lusaka Theatre Cooperative Society where he served as interim chairperson and also with the National Theatre Arts Association of Zambia (NATAAZ) as the general secretary.
In these positions, he provided the necessary counsel and leadership to both the general memberships with much humility and friendships to all.
He produced and co-produced a number of successfully executed productions including Chitimuluba, Kafuti, Longo, Kakraba and Shalapo Chani Chandala. By design or quack of coincidence, all these were written by the deft and astute hand of Mulenga Kapwepwe.
In fact, Shalapo Chani Chandala is the last play he produced, some time last year. This nearly threehour production is a social commentary on how people of the northern end of Zambia left their villages running away from the colonial hut tax. Most of whom fell to the vices of town-life on the present day Copperbelt Province and much in Kitwe town.
Drinking, theft, prostitution and a slice of sundown beer parties completely derailed a lot of these ‘immigrates’. The production was a huge success – it did nights in Lusaka before it toured the Copperbelt.
But, who said we cannot do plays in our indigenous languages? Shalapo Chani Chandala, which also translates as getting done with poverty or misery, is complete in Bemba and it transacted beautifully well with all its audiences.
Rodgers was there. He also produced Kiss the Hangman and African Sandauni both by veteran Kabwe playwright John Ntulisha.
In 2011, when general elections came about, Rodgers stood and won the Mwansabombwe Parliament seat under the Patriotic Front in that rustic end of the country.
And this had to hatch an idea of a Mwansabombwe Arts Theatre Festival (MWATFEST), which came to fruition only in 2013.
And from 2014 – 2018, the festival has successfully been held in Mwansabombwe and Mansa districts, bringing together severally over 10 theatre groups, some coming from Lusaka, Kitwe, Chingola, Kasama and Mwansabombwe itself.
And during the formation of MWATFEST in 2013, 20 youth of that district were trained in basic acting, directing and theatre management skills. These had to make the core membership to form the Mwansabombwe Theatre Ensemble.
After the training and the workshop production, the group toured Lusaka and the Copperbelt Provinces for public performances, and Rodgers was magnanimously at the heart of it all.
This enthusiastic group of young people had not stepped out of the district but the tour showed the other ‘civilisation’ only then. They were so thrilled to perform in big cities. This writer remembers the first performance they did at Lusaka Playhouse. With diligence, they had to later participate in the NATAAZ festivals where their production rewarded them the Best and Supporting Actor Awards in the male and female categories respectively.
MWATFEST co-founder members Isaac Kalumba and Dominic Sitamu were tasked to train the youths in dance and related choreographies. They did and these were to form a cultural dance group in Mwansabombwe that still functions independently to date.
This troupe, besides other activities like performing during Independence celebrations, even participated in the WTO joint Zambia-Zimbabwe cultural exposition that took place in Livingstone in 2015. This is how Rodgers touched and contributed to the development of arts and culture in this country.
At the Fountain of Hope, an orphanage in Lusaka that Rodgers co-founded, in 2003, himself merely at a paltry age of 24, it currently houses over 600 children from the streets.
Some youths have received basic skills to enable them engage differently, and some formed cultural dance groups which have ed the mourning of their ‘father’ Rodgers through continuous song and dance from the night of Saturday to burial date.
“Despite Rodgers’ death, Mwansabombwe Arts Theatre Ensemble (also the organiser of the MWATFEST) shall endeavour to continue not only to keep his legacy but to achieve the dream he shared with the team and other stakeholders to establish an arts hub in that district, which will include an amphitheatre, accommodation
space, visual and audio studios, and a radio station,” Kalumba says. “These would provide education, employment and entertainment to the youth of Mwansabombwe.”
This is indeed a towering and affable man the National Arts Council of Zambia (NAC, through chairman Patrick Samwimbila eulogised as a great loss, a painful loss to the nation and the whole artistic fraternity in the country.