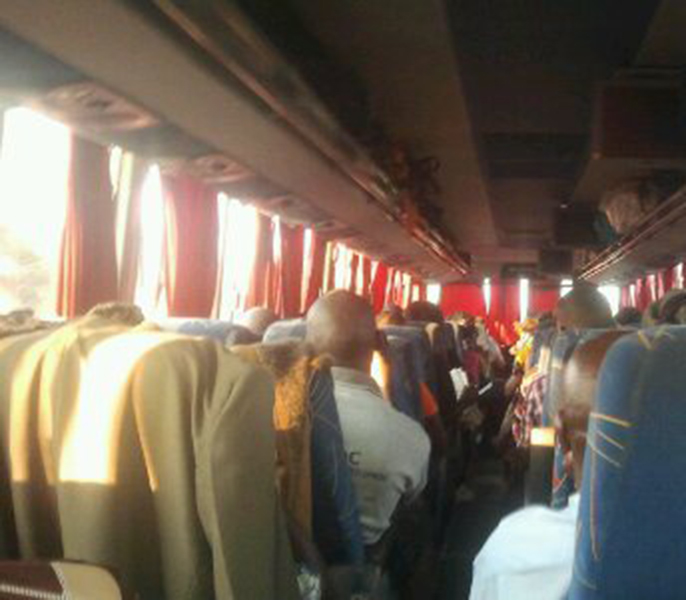 LIFE! WHAT A JOURNEY with CHARLES CHISALA
DID I hear someone say travel by public passenger transport is boring? Thatâ€™s far from the truth.
I recently took a trip to my beloved home district, Samfya, in Luapula Province (we call it Liverpool) aboard one of those big Marco polo buses, and I can assure you it was anything but boring.
I was on my way to Lubwe in Chief Chitemboâ€™s chiefdom to cover this yearâ€™s Kwanga traditional ceremony of the Bena Ngâ€™umbo people.
The ceremony was scheduled for Saturday October 4, 2014.
On Thursday October 2, 2014 I bought a ticket for one person at K145 at the Peace Soldier booth at Lusakaâ€™s ever chaotic Intercity bus terminus.
A close scrutiny of my ticket, number 305395, with the words â€˜Peace Soldier, pride of Luapulaâ€™ written at the top, revealed that I had been allotted seat number 16.
I was yet to prove for myself if Peace Soldier is really the pride of Luapula.
The ticket indicated the departure time as 14:30 hours, but the bus only exited from the Intercity bus terminus at 14:54 hours after a long wait.
Long after all the passengers had boarded the bus there was no sign of it starting off.
The ground and road crews were taking their time, unbothered by the incessant complaints from the suffocating passengers and the cacophony from crying infants.
There was a lot of haggling over highly exaggerated luggage fees for those who put their luggage in the busâ€™s hold.
No scale was used to determine how much one should pay for a piece of luggage.
The guys would give a piece of luggage a cursory look, for a mental assessment, lift it and put it down and announce the fee.
Any attempt to negotiate, no matter how polite, attracted threats of being left behind.
And that day the summer heat was merciless. It was really hot!
We remained â€˜roastingâ€™ peacefully in our seats, sweating as we waited for the bus to pull out.
Peopleâ€™s tempers were at boiling point thanks to the combination of uncertainty and the heat inside the bus.
The situation was a tinder box, just waiting for a glowing splint or spark to set it aflame. And there were not few quarrels.
The most prominent of the skirmishes broke out between a dark, short man and a younger man who had apparently occupied his seat.
The ticket seller had indicated the same seat number on two different tickets, and there were several such cases.
Sweating profusely the small, short man, whom his friends were calling Munkanta, entered the bus clutching parcels in his hands.
He was dressed in jeans, a floral black shirt and red cap.
When he reached his seat on the left as indicated on his ticket he found this young man already sitting there.
A bitter argument erupted between the two over who the legitimate â€˜ownerâ€™ of the seat was. They were both Kawambwa-bound and seemed to know each other very well.
The younger man was taller and bigger in stature, but the diminutive Munkanta was more aggressive. His confidence and athletic physical features left nobody in doubt as to the likely outcome of any physical clash.
â€œMwaice wandi nakupapata mfumina pa cipuna. Ciwa cikukolele (young man please leave my seat; are you under some spell)?â€ Munkanta pleaded as he stood looking over the head of the young man.
But the younger man was adamant. â€œIwe ka Munkanta, you are just a passenger like me. When did you buy the whole bus?â€ he challenged him.
This further incensed the sweating Munkanta, who put his parcels down and angrily grabbed the collar-ends of the young manâ€™s shirt.
With one effort he heaved him into a standing position, to the surprise of the other passengers.
There was pulling, pushing and shoving as the young man tried in vain to extricate himself from Munkantaâ€™s vice-like grip.
â€œHey, you two stop fighting. We will throw both of you out of the bus,â€ someone shouted at the back amid laughter, but the warning went unheeded.
Munkanta held on to the collar-ends of the young manâ€™s shirt with all his might.
â€œI can beat you, if you donâ€™t know me,â€ Munkanta threatened while looking the young man in the eyes.
â€œYou canâ€™t beat me,â€ the younger but bigger opponent shot back despite his precarious situation. â€œYou know very well that you canâ€™t.â€
Munkanta only let go, albeit reluctantly, after a crew member threatened to hand both of them over to the police within the bus station if they did not stop the â€œnonsenseâ€.
The younger man decided to look for another seat farther at the back of the bus, but not without a parting shot.
â€œKakwatafye amano ayakumushi (his behaviour is that of a typical villager),â€ he remarked as he made his way down the gangway.
But this did not go down well with the triumphant Munkanta.
â€œYou donâ€™t know me. Kuti nakwimisha kubwaume (I can lift you by your manhood) if you donâ€™t know me, mwaice,â€ he warned.
There was a mixture of laughter and rebukes from the other passengers. Another quarrel broke out at the back. One female passenger was accusing a male â€˜neighbourâ€™ of stealing her phone, not knowing that she had dropped it under her seat.
That is just one of the many things I witnessed on the Peace Soldier bus, the â€˜pride of Luapulaâ€™!
charles_chisala@yahoo.com