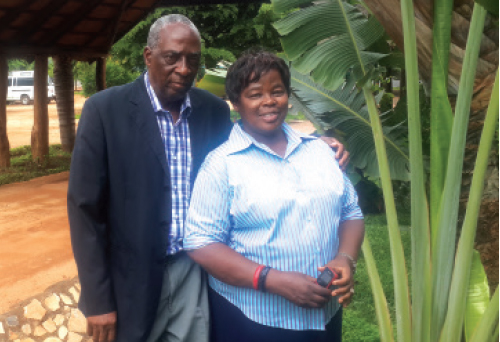 CHIMWEMWE MWALE, Lusaka
HIS humility, wealth of knowledge and experience arouses curiosity about the journey of life of one Mwelwa Kosta Tembo of Petauke district in Eastern province.
His wealth of knowledge could be largely attributed to his long engagement in public service, mainly in diplomatic missions abroad, back home and in Petauke where it all started.
A pragmatic, meticulous economic planner and cheerful person, Mr Tembo runs a successful business in his home town with his wife Edith.
The Tembos have become successful entrepreneurs in an area where many would think twice before investing colossal amounts of money owing to the perceived low economic viability of the rural district.
Mr and Mrs Tembo are the brains behind Chimwemwe Executive Lodge among other business ventures.
Flanked by his wife who describes him as a â€œgood boyâ€, Mr Tembo tells the story of his life, highlighting some of his accomplishments in this interview.
Q: Tell me about your background?
A: I was born in Matonje village, Petauke in Chief Mwanjabantuâ€™s area (formerly Chief Matonje) in 1938. My father was a teacher, while my mother was a housewife and she did a very good job for us.
I went to Matonje Primary School and later to Mazimoyo where my father had gone to study theology and this is where I did the next two grades up to standard one. We then moved to Merwe where I did up to standard four at a mission school for the Reformed church. It was very competitive to qualify to standard five, and I was lucky I did. We then moved to Katete and there I continued my studies at a mission school that was run by the Reformed Church of Zambia.
My intake was the last batch to do the nine-year primary school course. I was again one of the lucky ones to move to form one at Chizongwe Secondary School (formerly Fort Jameson). But when it was being upgraded into a senior secondary school, I wrote to my dad that I wanted to go to Chikuni Secondary School because I had a bias towards sciences because I wanted to be a doctor.
My father advised me against going because his health was failing as he was asthmatic. He advised me to stop school and start working being the oldest son among six children.
I went for teacher training at Chalimbana and I began teaching after qualifying. During the first two years of teaching, I obtained my General Certificate of Education (GCE) and later I was transferred to Katete Secondary School in 1964.
In 1966, I went on study leave (in order) to study at the University of Zambia (UNZA), where I obtained a double major (degree) in political science and economics.
Five months after I left UNZA, I was appointed commercial attachÃ© economic representative at the Zambian mission in Dar es Salaam.
During that time, I was not married, but I came to know my wife through her brother whom I went to school with. By then, she was at Saint Monicaâ€™s School.
We got married in 1970 and went into foreign service (Dar es Salaam) together and lived there for four years. We are blessed with four children and five grandchildren
In 1974, I was transferred to London as Zambiaâ€™s trade commissioner. Zambia then had three commissioners in the European community looking after commercial and financial affairs; the two others were based in Rome and Bonn.
In 1981, they wanted to transfer me to New York to head the commercial section of Zambiaâ€™s Permanent Mission to the United Nations but I refused because I had been out for too long. I felt it was time for me to go back home and prepare for my retirement instead of globe-trotting. Of course life was nice and easy but I needed to come back home and face reality â€¦(laughs).
We came back in 1981 and my wife had obtained a diploma in Hotel Management and Catering from London by then. I had also attended a business management course in Canada and several other trade courses and I am highly qualified in that field.
I ended up being director of trade in the Ministry of Commerce for six years. I used to head the inter-governmental committee of experts when we were negotiating for COMESA (formerly Preferential Trade Area).
I retired in 1987 after Government introduced early retirement for those who had clocked 20 or more years. I joined and worked as manager for Zambia Export Growers Association which was associated with tradeâ€¦finding market and arranging movement of cargo.
At the end of 1988, I was appointed general manager of Robert Hudson where I worked until 1993 when I said enough is enough, I think I want to become general manager of my own cabbages in the backyard.
I began to look at what we could do here (Petauke). My wife and I had already agreed that we would retire to a rural area. My wife was by that time winding up her work at InterContinental Hotel Lusaka as an executive housekeeper after having served as banquet manager.
We bought a house and farm and established a small opaque (Ngabazi) beer brewing plant to help us with cash. We now have a small bakery.
We started building Chimwemwe Executive Lodge in 2006 and opened it in March 2007 with a restaurant and two chalets.
Q: What was your motivation considering your humble beginning?
A: I was convinced that coming from a village background was not a limitation despite the many hardships of growing up as a village boy.
To a large extent, I began training from that sort of life. Secondly, it was the desire to try and excel as much as one can.
Thirdly, I have had a very supporting wife who never fails me and whenever we have problems, we have always sat down together to find solutions. This is good encouragement, and above all, God is the overall boss who gives us the wisdom and strength.