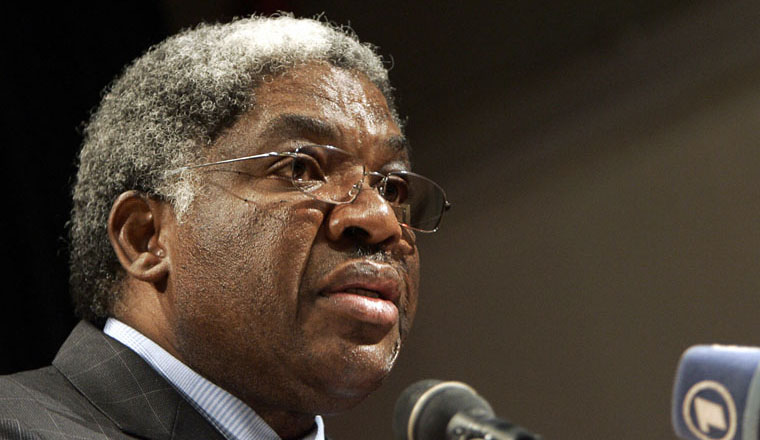 BY KELVIN ESIASA
THE demise of President Levy Patrick Mwanawansa was great a loss to Zambia. The late Former Republican President, Levy Patrick Mwanawasa, was described as a champion of the rule of law and a firm believer of justice and good governance.
In her eulogy at the funeral, Maureen Mwanawasa said of her husband: â€œTypical of you, you died on duty. You died a sad man as no one seemed to appreciate your sacrifices. Had you been with us today, I am sure these accolades could have made you happyâ€.
While Zimbabwean President Robert Mugabe described Mwanawasa as a very courageous leader, who was very frank and wanted to change not only his country but the entire southern African region.
And Commonwealth of Nations Secretary-General Kamalesh Sharma said Mwanawansa was deeply devoted in particular to the Commonwealthâ€™s goals of delivering development and prosperity to all, as well as its ideals of democracy, good governance, human rights and the rule of law.
Dr Levy Patrick MwanawasaÂ Â  was born on 3 September, 1948. He was educated at Chiwala Secondary School in Ndola and obtained his law degree from University of Zambia. He formed his own law company in 1978. In 1985â€“86 he served as solicitor general of Zambia.
Mwanawasa joined the new Movement for Multiparty Democracy (MMD), headed by Frederick Chiluba in 1990. Before MMD convention in 1990, Mwanawasa was widely tipped to become the President of the Movement for Multiparty Democracy (MMD), but he declined the overture, citing his young age and inexperience. He opted instead to stand as a Member of Parliament and won with an overwhelming majority of the popular vote.
On December 8, 1991 Mwanawasa was involved in a serious traffic accident in which his aide died on the spot. He suffered multiple body injuries and was flown to Johannesburg, South Africa for medical treatment. He remained hospitalized for three months.
Mwanawasa resigned as Republican Vice President in July 1994, claiming that Chiluba had made his position increasingly irrelevant. He also accused the government of condoning irresponsibility and greed.
Subsequently Mwanawasa devoted himself primarily to his legal practice until he became republican President in 2001.
In his early days of Presidency Mwanawasa came to be known as â€œthe Cabbageâ€. Infuriated by this abuse, Mwanawasa took to closing his rallies with the words: â€œI am not a cabbage!â€ Mwanawasa moved establish his authority and launched a campaign against the corruption that had brought the MMD into disrepute.
Mwanawasa started anticorruption crusade by arresting his predecessor former President Chiluba for corruption.
He also arrested top service chiefs in the Zambia Army, Zambia Police, Zambia National Service, Zambia Air Force and Zambia Intelligence Services for corrupt practices.
Apart from the fight against corruption, Mwanawasa managed to win a lot of support from many Zambians and foreigners. Foreign investors liked Mwanawasa, owing partly to his anti-corruption drive. During his presidency, Zambia received a lot of foreign investment.
Mwanawasaâ€™s policies helped to lower inflation and spread some benefits to the poor. Mwanawasa turned the Zambian town of Livingstone, near Victoria Falls, into a tourist hub. Zambia received a relatively large amount of aid and debt relief because of liberalisation and Mwanawasaâ€™s â€œstolid effortsâ€.
Overall, the countryâ€™s economy grew by about six per cent per year.
At the time of his death, Zambia was described as the fastest growing economy in world.
The government had also put up measures that would revamp the agricultural sector and making Zambia the food basket of Africa.
Borrowing President Micheal Sataâ€™s words, indeed Mwanawasaâ€™s death was a â€œnational disasterâ€. Zambia will certainly miss him.
The author is president for Zambian Society for Public Administration and Society for Family Business.