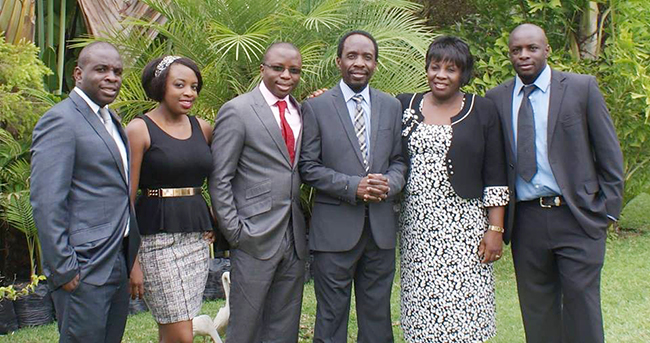 NKOMBO KACHEMBA, Kitwe
â€œHE was a father to the fatherless, a pillar of strength to the weary and a symbol of hope to the hopeless,â€ these are some of the accolades showered on late Bishop Sky Banda, who was a senior pastor at Maranatha Church in Kitwe.
Born on July 30, 1956 to Elijah and Sarah Banda in Mufulira on the Copperbelt, Bishop Banda was multi-talented and those who knew him during his youth, vividly recall his passion for folk music.
His love for music compelled him to join a number of bands, among them, the Exile Band, where he performed alongside George Mbulo and Green Phiri, who are now heading different gospel ministries.
In November 1977, the late Bishop Banda decided to give his life to God and immediately went to pursue studies in theology at Pentecostal Assemblies of God Bible College in Kitwe, where he graduated with a diploma.
He later proceeded to West Indies to pursue a Bachelorâ€™s Degree in theology and graduated in 1981.
After returning home, Bishop Banda married Sophie, who unfortunately died last year after an illness. The couple had four children: Zibani, Yamikani, Zelu and their only daughter, Gift.
In 1985, the deceased clergy joined Kitweâ€™s Maranatha Church as general secretary, a position he held until 1988 when he was appointed chief bishop.
In 1991, he was appointed assistant chief bishop before taking up the position of second assistant chief bishop in 2008, a position he held until his death.
Bishop Banda, who was buried on Thursday last week at Nkana Cemetery in Kitwe, rendered his service to the church for more than 30 years, the feat that has left members of his church heartbroken.
The late bishop was not only famous at home but also abroad where he shared platforms with prominent politicians and international church leaders.
He was also a father of the fatherless, who always called upon him whenever they needed spiritual and material support, which he graciously rendered.
His sermons were full of humour such that even his funeral service at Maranatha Church was equally characterised by laughter as his contemporaries, church and family members, celebrated his life and distinguished service.
â€œThe late bishop had a passion for music and had numerous musical instruments which he discarded upon becoming a Christian, only to realise that he actually needed them more in church,â€ his elder brother Manda Banda shared as the worshippers burst into laughter.
Dr Banda recalled how his late brother, while staying at his parentsâ€™ home, hijacked a bedroom which was a guest room for missionary pastors.
â€œBishop Banda came from a Christian background.Â  I remember we had a missionary who visited our house in Mufulira and our parents had to buy new beddings for the visitor and decorated his room.
â€œImmediately after the visitor left, Bishop Banda forcefully occupied that room, taking over everything, including the new bedsheets. We might not know, maybe that is where he encountered God,â€ Dr Banda said.
His friends, family members and church leaders, continued to share their profound memories with late Bishop Banda, including his four children who bid their father farewell in a brave manner.
â€œHe was a great dad to us and also a father to all in this church. He really taught us the word of God which will remain our pillar even in his death,â€ the late bishopâ€™s first born son, Zibani, eulogised.
Council of Bishops representative Harrison Sakala prayed for Bishop Bandaâ€™s four children, asking God to guide them through their lives.
â€œYour father really did a good job raising you up in a responsible manner. Just look at the way you are looking, you are all here to mourn your father,â€ Bishop Sakala said.
The deceasedâ€™s former band mate Bishop Mbulo also sent his accolades via video conferencing, expressing his fond memories of Bishop Banda, much to the amusement of the church congregants.
Government was also represented at the funeral church service, with chief government spokesperson Chishimba Kambwili encouraging church members to remain united even after the death of Bishop Banda.
Mr Kambwili, who is also Minister of Information and Broadcasting Services, described Bishop Banda as a giant of faith and a pillar of strength to those who needed guidance on spiritual matters.
â€œI personally met Bishop Banda at Mpatamatu Secondary School in Luanshya where I was the scripture union chairperson.Â  Bishop Banda was a man of excellence and a giant of faith,â€ the minister said.
Mr Kambwili said government is deeply saddened by the death of Bishop Banda, whom he said was full of humility.
â€œPresident Lungu could have personally come here to mourn with you but he sent me to represent government.Â  When President Lungu used to practice law in Kitwe, he used to attend some of the church services conducted by Bishop Banda,â€ he said.
Mr Kambwili also called on the church to continue praying so that God can guide the nation through the challenges the country is currently facing.
Presiding over the church service, Pentecostal Assemblies of God chief bishop Robertson Nonde urged the church to remain united even after the demise of Bishop Banda because they have a call to serve God.
â€œThere is life after death and Bishop Banda has just started his life.Â  Let us remain strong and united,â€ he said.
The church leadership also prayed for Godâ€™s protection of Bishop Bandaâ€™s children as they move on with life without their parents.
Among the dignitaries that attended the funeral of Bishop Banda were Chililabombwe member of Parliament Esther Banda, Copperbelt deputy permanent secretary Elias Kamanga, Kitwe deputy mayor Godfridah Chulu and Chililabombwe district commissioner Stuart Chitumbo.
Others included suspended Director of Public Prosecutions Mutembo Nchito, prominent lawyers William Nyirenda and Elijah Banda, as well as officials from different political parties.
For many Christians in Kitwe, the Copperbelt and beyond, Bishop Banda may have gone to the other side of the world, but fond reminiscences of his adorable Godly service will linger on for innumerable years.

Do people know the â€˜festive problemâ€™?
How to fast-track tourism diversification