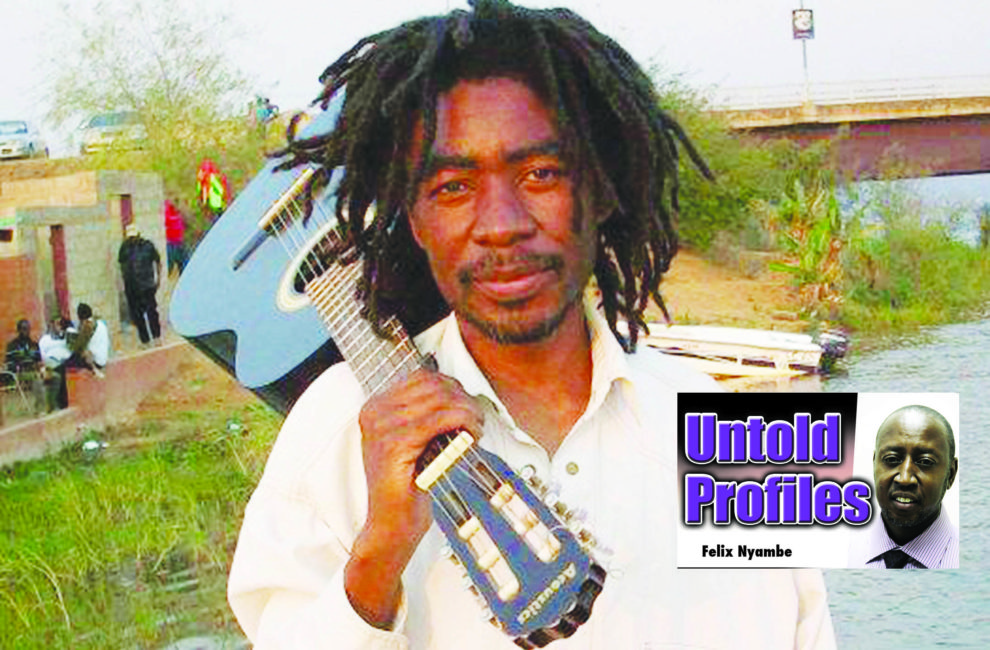 Untold Profiles with FELIX NYAMBE
INSPIRED by Brian Shakarongo’s “Jah Night” reggae carnivals, a galaxy of reggae bands and soloists have emerged on the local front.

A number of those acts have gone on to make names for themselves and continue to perform at the Jah Night.
One name has not been seen for some time now, but he is still very much around.
Known to his family as Martin Nkhoma, Jahluther is undoubtedly one of the trendsetters of local contemporary reggae music and will never stop at anything to promote the music style from Kingston, Jamaica.
Leonard Koloko, in his book, Zambian Music Legends described Jahluther aptly.
“Music educator, performer, composer, arranger, instrumentalist, vocalist, dancer and art adviser/ consultant sums up Martin Nkhoma’s involvement in Zambian music in addition to be a reggae artiste,” Koloko wrote.
His early association with reggae music may have been with the Ubangi Roots of the Ujama Reggae song in the late 80s, but his commitment to the music industry has been unrivalled.
Born 47 years ago in Luanshya, where he was schooled at St Anthony Primary and Mpatamatu Secondary schools, before enrolling at Libala Boys High School in Lusaka, Jahluther has always been a sworn reggae fanatic.
“Apart from my undying love for reggae music, l was also hooked into some theatre and drama antics while in secondary schools,” shared Jahluther.
Eventually, the dreadlocked singer found himself among the educative and informative ZANACO Theatre Club, while occasionally finding time to skunk with Ubangi Roots from time to time.
But after a three-year-spell with Ubangi Roots led by Khuzwayo Chisi, another of the reggae revelations, Jahluther went on to jam with Lauline Mutale’s Rainbow Makers while maintaining a brotherly relationship with his former mates.
“It was a massive experience jamming with the Rainbow Makers as we had the opportunity of performing live across the country,” revealed Jahluther, whose music is inspired by Bob Marley, Black Uhuru and Don Carlos.
But it was, probably, at Stanely and Lumumba Bars, Lotus Inn, Top 5 in Kanyama in addition to their perpetual appearance at the annual Bob Marley Memorial shows that the Rainbow Makers showed their true colours.
And his relationship with the Rainbow Makers did not however end with the shows as together with Lauline, he produced some of the unsung reggae songs.
“We had entered the studios and recorded such songs as Rainbow Makers Felling, Ndikwela Mini Bus and Thank You,” says Jahluther.
But in 1993, he quit Rainbow Makers to form his own very first band known as VAM, an acronym of brothers Victor and Alfred with Martin as band leader.
With lack of musical instruments, VAM had to partner with Shalawambe band, another of the local musical luminaries fronted by the versatile Dolenzy Kabwe, who have defined Kalindula music in their own right.
This “marriage” had become regular features at virtually every Ndola International Trade Fair and Agriculture and Commercial shows in the country.
In 1995, Jahluther, parted company with VAM for a more lucrative solo career which saw him share the stage and being backed by the likes of Muvi Posse, Elders Vibrations and the Wailing Roots.
His solo songs include Imikalile Yashupa, Imagine, Fire, Pamushi, Kanshi Yandi, Somone and Rasta Tagomaika, which was seemingly the response to Serenje Kalindula’s song Rasta Aligomaika.
In between the recording of other songs like Uncle, Bushe (recorded in Zimbabwe), Namitotela and Introduction in 2002, Jahluther was also involved in the running of a non-governmental organisation known as “Life Bridge” with co-partner Violet Kafula, the godmother of Zambian music.
“Although we have since parted ways with aunty Violet, I am still actively involved in music,” stated Jahluther, who has now settled in Kafue town.
fmmusik201730 yahoo.com, 0979360993/0964873656.