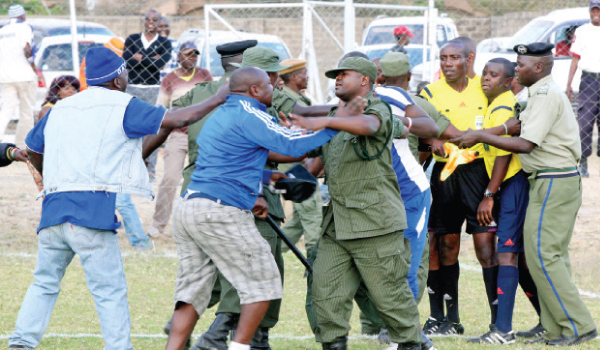 By DIANA MUTAKAFIMBO
REFEREES have called for enhanced security at stadiums during league matches to avoid possible attacks.
And Football Association of Zambia (FAZ) referees manager Katongo Kabungo has urged the whistlemen to remain resilient in their duties despite the recent attacks.
Some referees that sought anonymity are saddened by the levels of ignorance on the rules of the game.
â€œWith such things happening, most referees feel discouraged and intimidated, especially the upcoming ones. We donâ€™t want a situation where referees will be compromised just for their safety. We need a lot of security during league games. Security needs to be strengthened,â€ he said.
He said there is need for clubs to enhance security at stadiums and that both players and officials should be educated on the rules of the game.
â€œIt is not a secret that some players and some officials donâ€™t understand the rules of the game and therefore it becomes very difficult for them to understand certain decisions we make during matches. There is need for them to know the rules of the game,â€ another referee said.
And Kabungo hoped the situation will change with stringent measures FAZ has put in place.
He said most of the incidents are as a result of lack of knowledge on the rules of the game.
â€œPeople should understand the laws of the game. It is ignorance on the laws of the game that is causing all this,â€ Kabungo said.
He said referees are doing a good job and should not be intimidated by ignorant people.
â€œI just want to encourage our referees not to be intimidated. They should continue doing their best,â€ Kabungo said.
Ten days ago, referee Chiwoyu Sinyangwe escaped a lynching during a Week 23 match between Zanaco and Kabwe Warriors at Lusakaâ€™s Sunset Stadium after he disallowed the latterâ€™s goal.
Earlier, Warriors fans nearly lynched referee Milton Mwemba when he ruled Josephat Kasusuâ€™s goal offside during a Week 22 match against Nkana at Godfrey Chitalu Stadium in Kabwe.
Godfrey Chitalu Stadium has since been closed for the rest of the season.