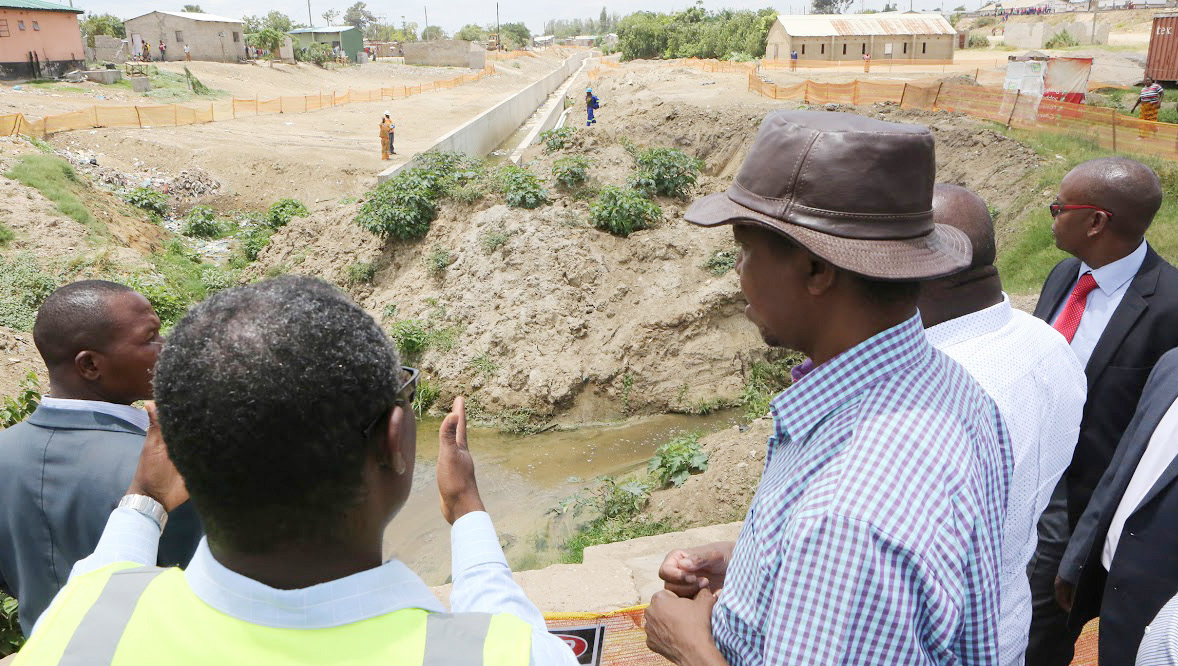 YANDE SYAMPEYO, Lusaka
EVEN when the capital experiences average rainfall, Lusaka can still be overcome by flooding due to the poor drainage. Once against the rains have come and so are our fears of floods.
This is what prompted President Edgar Lungu to undertake an impromptu tour recently to establish the preparedness of his officers in dealing with the perennial problem.
President Lungu inspected the Bombay drainage project, which is part of the US$355 million Lusaka Water Supply, Sanitation and Drainage (LWSSD) project funded by the United States (US) government through the Millennium Challenge Corporation (MCC) in partnership with the Zambian government.
Mr Lungu is concerned about the consistent outbreak of cholera and other waterborne diseases as a result of flooding.
â€œDrainage has been a big problem. I have come to see what you are doing. The American people have given us money through the MCA. I know there is problem of drainage in Chawama, Kanyama and other places. I want you to show me your preparedness, right now. These are things that happen every year; cholera, flooding,â€ Mr Lungu says.
Mr Lungu, whose first stop of inspection was NIPA area says the Bombay drainage project needs to be replicated in other parts of Lusaka to end the perennial flooding during the rainy season.
The Head of State also visited Garden, Chawama and John Howard townships to check on the drainage, water and sanitation projects.
President Lungu directed the local authority to urgently, and without compromise, demolish illegal properties constructed on water and sanitation infrastructure.
M r L u n g u s a y s h i s administration is on firm ground and will not support illegality regardless of who is perpetuating it.
He explains that Government will not entertain structures that are a hindrance to the effective supply of water and sanitation services to the public.
â€œIf we do not finish this project by 2018, we will lose funding. If we remain hanging, the Americans will withdraw.
â€œSo those illegal properties that are not part of the arrangement of resettlement or compensation, Tizapwanya [we will demolish], because this programme has to run by 2018,â€ he says.
But what is the lasting solution to flooding
â€œWho is the master in terms of drainages in Lusaka, who can tell me for a fact that if we do this, we will cure flooding problem in our city. What do we need to do to cure flooding in Lusaka as a city?
â€œYou should tell us as it is, we will know that we have not solved this problem but I was given the illusion that once we do this [Bombay drainage], then we are done,?â€ President Lungu asked.
The Lusaka City Council (LCC) says the lasting solution to the perennial flooding in the city lies in rehabilitating the six primary drainages of which the Bombay project is one.
LCC director of engineering services Maliwa Muchuu says once the primary drains are worked on, the flow of water in the capital city will be smooth.
Mr Muchuu informed the Head of State that Poly-Technology, a Chinese company has applied to the local authority to finance five of the primary drainages.
He says the application has since been forwarded to the Ministry of Local Government for consideration.
â€œAs Lusaka city, we have six main outflow drainages, the Bombay drainage is just one of them. For as long as we do not work on these primary drainages, it will be difficult for us to discharge water,â€ Mr Muchuu says.
Millennium Challenge Account (MCA) deputy chief executive officer Isaac Banda says the design of the Bombay Bridge is advanced and will be able to take out the water quickly and channel it to Ngwerere.
Mr Banda says under water supply, MCA is carrying out a number of projects starting from the water source in Kafue.
He adds that MCA is upscaling the treatment works, restoring design capacity and working on the pipeline from Kafue.
â€œAs you know, after so many years from about 1970 to date, a lot of features on the water pipeline from Kafue are not working well.
â€œWithin Lusaka, we are working on major lines that will cater for design and demand up to 2035, so you might find that we are going to various institutions to do with resettlement aspects, compensating certain institutions as required. We want to thank Government for the support given to us especially when it comes to resettlement to ensure we get the land required for this project,â€ Mr Banda says.
He explains that MCA is also undertaking a major project is in Mtendere township, an area that has not been serviced by water-borne system.
â€œUnder this project, we are doing water borne sanitation, right now we have a contractor on the ground who is doing water supply and a new sewer reticulation.
Apart from that, we are doing several other interventions in capacity building for the institutions that we are working with. We are working with LCC, who are our key stakeholders on the drainage and they will receive this property once it is completed,â€ he says.
Mr Banda adds that MCA is also working with the Ministry of Local Government and LCC to create an autonomous solid waste management unit, of which a consultant has since been appointed.