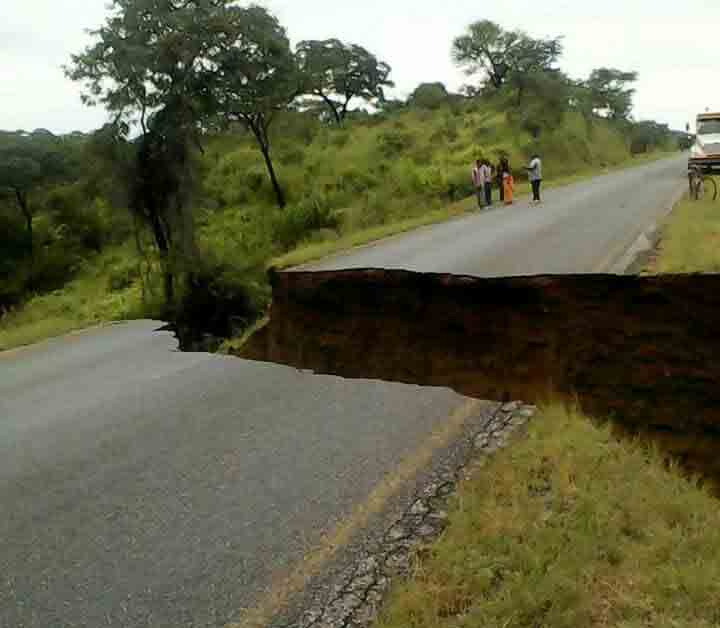 PRISCILLA MWILA, CHOMBA MUSIKA, Lusaka
A SECTION of the Maamba-Batoka road has been washed away in Southern Province about 43 kilometres from Batoka cutting off most of Sinazongwe district from the rest of the country.
The Zambia National Service (ZNS) has sent its officers to Sinazongwe to help repair the road which has been damaged after heavy rains.
Road Development Agency (RDA) director of communications and corporate affairs Loyce Saili said the floods have left a gap of about seven metres wide on the road.
The damage has left motorists, especially truckers, stranded because they do not have an alternative route.
Ms Saili said in a statement issued in Lusaka yesterday traffic from Maamba and Sinazongwe had been cut off from the rest of Southern and Lusaka provinces.
â€œWe have sent our engineers to carry out a thorough assessment of the damage to ascertain the appropriate intervention that is required to remedy the situation. We are anticipating to open the road up to motorists today,â€ she said.
Ms Saili said RDA is working with Maamba Collieries to restore the affected section by backfilling the gap with rock fill.
She advised members of the public who intend to visit the affected areas to avoid using the Maamba-Batoka road until it is repaired.
Ms Saili said the agency is also making arrangements to mount a Bailey bridge at the affected point for temporary use.
She said the Bailey bridge components were being mobilised from provincial offices in Western and Central provinces and that the transportation of the pieces began yesterday.
Zambia National Service (ZNS) officers are in Sinazongwe to help mend the damaged portion of the road.
Sinazongwe district commissioner Protacia Mulenga said in an interview yesterday that a team of ZNS officers have been dispatched to the area to access the situation and work on the road.
â€œPart of the road was washed away after a heavy downpour and we are currently working out modalities on how to arrest the situation.
â€œThe damage to the road is very big but manageable and ZNS officers are on the way to the site,â€ Mr Mulenga said.
He said Mamba Collieries mine has also offered to help mend the damaged section of the road using their earthmoving equipment.
In 2010, road access to Sinazongwe district was cut off following the collapse of a culvert on the same Maamba-Batoka road.
Meanwhile, LUCY LUMBE reports that 50 houses have collapsed in Lusakaâ€™s Mazyopa settlement leaving families homeless as a result of floods caused by heavy rain.
Lusaka district commissioner Davison Mulenga said in an interview in Lusaka yesterday that the deluge has also three school houses at Tunduya Basic School damaged.