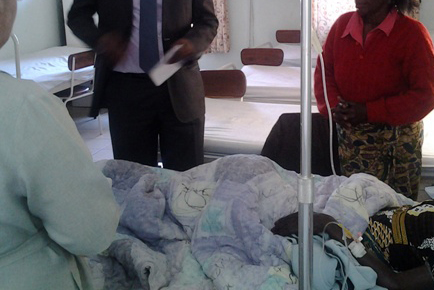 LINDA NYONDO, Lusaka
CHILANGA Hospice management has appealed to Government to put some of their members of staff on the pay roll to enable them continue providing services to the terminally ill.
Director, Sister Jeremia Mrowiec, said in Chilanga on Wednesday that the hospice is facing financial problems which make it difficult for them to reach out to all people in need and also pay members of staff.
She made the remarks after officers from the Zambia Air Force and Zambia Police donated assorted items and also helped to clean the surroundings and wards.
â€œWe had initially closed the Hospice in 2012 to 2013 due to operational challenges. We also closed it last year because we did not have money to run it. During the time the hospice was closed, some terminally ill patients who needed palliative care from the hospice died,â€ Sr Mrowiec said.
She said the Chilanga Hospice was opened in January this year, however, management is still struggling to meet operational costs.
Sr Mrowiec said the hospice has 16 members of staff; five of them being qualified medical personal and 11 support staff who are paid a minimum wage.
She said 80 percent of funding to run the institution comes from donors.
The nun thanked Government for the grant they receive, but she said that it was not enough to meet their needs.
And Zambia Police paramilitary superintendent Alfred Phiri said members of staff from the Lilayi unit decided to give to the hospice as one way of giving service to the community.
â€œOur service here at Chilanga Hospice has coincided with our celebration of Police Day which falls on the 4th of March every year,â€ he said.
And Zambia Air Force director of gender, Catherine Nkolola said the members of staff decided to extend their service as a way of reaching out to the needy.