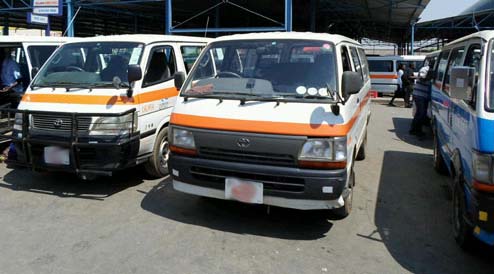 NKOLE NKOLE, Lusaka
UNEMPLOYMENT remains a worrisome factor in Zambia with at least 4 million of the countryâ€™s youth jobless.
It is a problem that has caused restlessness among many youths struggling to eke out a living for themselves on a daily basis.
It is also a problem that provokes youths to break laws whenever the opportunity presents itself.
In the transport sector, for instance, it has led to the flouting of the law regarding the minimum age for drivers of Public Service Vehicles (PSVs) which presently stands at 25.
Section 64 of the Road Traffic Act No.11 of 2002 prescribes the minimum driving age of a PSV driver as 25. A PSV driver must also have an additional two years driving experience.
This law has been considered a restrictive and has cut off a number of Zambian youth from being employed in the transport service.
It is also thought that the specific provisions of the Act have further encouraged an increase in the number of pirate taxis and unauthorised PSV drivers on the countryâ€™s roads, which compromises road safety.
In addressing this issue, the Ministry of Transport, Works, Supply and Communication, in conjunction with RTSA, embarked on the review of the minimum driving age for PSV drivers.
The approach was to obtain submissions or proposals from the public as well as conduct a series of consultative meetings for a revised age to be considered.
â€œThis exercise is being done in conjunction with all stakeholders in the transport sector as well as the public so that we can have consensus on an acceptable age,â€ RTSA information officer Frederick Mubanga explained.
The government has already received several submissions from the public on the reviewed minimum age of PSV drivers.
Mr Mubanga said it was from the recommendations that a study into the existing law would be made.
After the Ministry of Transport, Works, Supply and Communications has concluded its study, a possible amendment to the law will be made once it is ratified in parliament.
Additionally, RTSA will also conduct benchmark surveys to consider how the law has worked in other countries.
â€œAs RTSA, we are also being very careful so as not to compromise road safety,â€ Mr Mubanga highlighted. â€œWhat we want to achieve through all this is consensus and we want it to come from the people.â€
It is also RTSAâ€™s duty to promote a safe and efficient road transport system for all road users countrywide through stakeholder participation, education, regulation, and traffic law enforcement.
Mr Mubanga stated that educating and informing the public were considered important in the attainment of the RTSA mandate.
Flash Buses proprietor Ishmael Kankara said transport operators like himself have asked the government to reconsider adjusting the minimum PSV driving age from 25 to 21.
â€œMany of our youths want to make PSV driving a career and so we have supported the idea to review it,â€ Mr Kankara said.
He shared that they are also proposing that the minimum driving experience for PSV drivers be reduced from two years to six months.
But taxi drivers spoken to expressed mixed feelings on the matter.Â  Joseph Sakala, a Lusaka taxi driver, said he preferred that the current law remains as it is because driving people demands responsibility and a certain level of maturity. In his view, PSV driving is not the only available career option for unemployed youths.
â€œWhen you are a PSV driver, it means you have to carry more than four people and definitely those that want to drive that number of people should be mature, not just 21,â€ Mr Sakala explained. â€œThe age 21 is not mature enough, no wonder we have the current law.â€
Mr Sakala said he was concerned that adjusting the age for PSV drivers would encourage a further adjustment in future.
He stated that there is a lot involved in driving and a lot of situations on the road require, experienced minds to navigate through.
He was also of the opinion that even the maximum age for PSV driving should be considered during the review.
â€œYou canâ€™t just give a public service vehicle to a much older person, for instance, someone as old as 88 because that is also risky,â€ Mr Sakala explained.
However, Public and Private Drivers Association president Josiah Majuru disagreed with Mr Sakalaâ€™s views.
Speaking on behalf of the association, Mr Majuru insisted that the minimum age limit for PSV drivers should be reduced to 21 as the majority of drivers are of a youthful age and many are unregistered because they are unlicensed.
He said these unregistered drivers are operating illegally because of the law which states that they cannot drive until they are 25 or older.
â€œIf they increase the age limit, that means they will allow more people to be operating illegally, further compromising safety on the roads,â€ Mr Majuru emphasised.
â€œIt is an appeal we are making as the people on the ground. Very few PSV drivers are over the age of 40 as the transport sector is one of the few that employ people with or without academic qualifications.â€